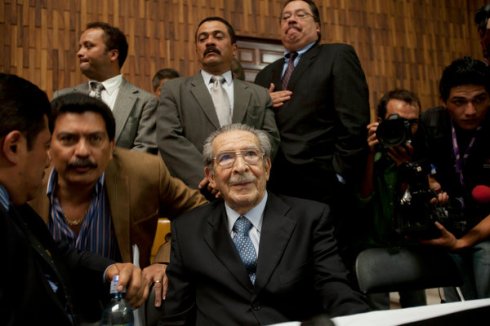 MOMENT OF TRUTH: RIOS MONTT LISTENS TO THE VERDICT

In the extraordinary moments following the historic verdict of guilty in the trial of former Guatemalan president Efraín Ríos Montt, a song broke out among those crowded inside the courthouse, with lyrics taken from a poem by Otto Rene Castillo:

Though unable to find the mother text for these particular lines, we came across another poem (with translation below) while searching:

RIGOBERTA MENCHU REACTS TO THE VERDICT

We also came across this stunning passage from the 1982 testimonial I, Rigoberta Menchú, written by the brave Mayan woman (and 1992 Nobel laureate) who suffered much during the time of the genocidal campaign executed by Ríos Montt and many others; a woman far ahead of her time, yet one who labored tirelessly against reprisals, cover-ups, redactions, distortions of official history and false reconciliation.

ANGELS WATCH OVER MEMORIES OF WAR

May those very same angels watch over all the witnesses who came forward to testify against the genocidal regime, in the months and years to come.

This entry was posted on Wednesday, May 15th, 2013 at 16:05 and tagged with Daniel Hernández-Salazar, otto rene castillo, rigoberta menchu, rios montt and posted in bearings, buoys, DP. You can follow any responses to this entry through the RSS 2.0 feed.
« The Soniferous Æther
Listen to the Logos »