For those who doubt that any technology used against animals will eventually be used on humans as well, we invite contemplation of the short film made by Thomas Alva Edison:

Topsy was electrocuted for the crime of rebelling against circus workers, one of whom had tried to feed her a burning cigarette. Edison, of course, had been executing animals using electricity for many years, beginning with a mass electrocution in 1887. Indeed, newspaper reporting on that grim spectacle marked the first documented use of the term “electrocution”.

In 1890, a man named William Kemmler became the first human to “ride the lightning” upon the electric chair. The date was August 6, which would eventually become the same date for Hiroshima Day, as the age of electricity mutated into the age of radiation.

In related research, we also invite contemplation of an extraordinary essay by Vasile Stanescu who, among other critical histories, draws our attention to the striking similarity between the photos of trophies at Abu Ghraib and photos of safari corpses. We recommend the entire essay, while borrowing two of the photos he includes therein (captions added by DP): 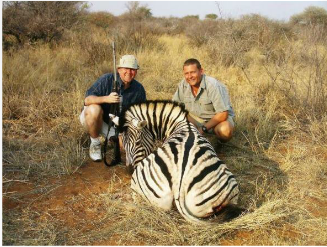 ARRANGED MEAT WITH TWO SMILES I 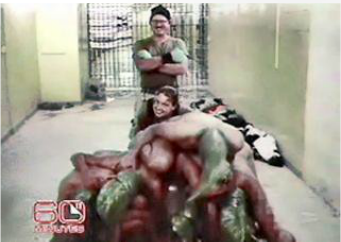 Reduction of humans into animals (“like dogs”, etc.) will continue so long as animals are treated as nothing more than meat. As we have long maintained, human rights and animal rights are connected at the deepest levels of ontology. We ignore these connections at our extreme peril.

This entry was posted on Monday, October 6th, 2014 at 12:56 and posted in bearings. You can follow any responses to this entry through the RSS 2.0 feed.
« A Chasm in the Present
Wheels of Birds »