We begin our navigations through the year 2015 with a few questions for artist Rebecca Clark, whose quietly magnificent drawings exemplify the deep journey of self-realization that was described by Arne Naess in our final post of 2014; we celebrate her work among our many sources of joy, as we move into the dense fog of the coming year.

DP:     How would you describe the genesis and inspiration for your recent drawing, Family Tree?

REBECCA CLARK:     The genesis of Family Tree has its roots in Annapolis, Maryland, where I spent my childhood exploring the woods and creeks along the Chesapeake Bay near my house.  The natural world was where I was happiest, and the local plants and animals were my friends. They taught me much about life. Those early years spent immersed in nature formed the foundation for a visual vocabulary that I was able to tap into many years later.

My drawings are meant to convey not only the beauty, but also the sacredness of the natural world.  To that end I use circular forms, such as dandelions and spider webs and bird nests, as symbols of cosmic mandalas echoing the cycles of life.  In Family Tree the rings suggest a nimbus rendering sacred all life of the wood.  Trees are magnificent examples of the interconnectedness of life. 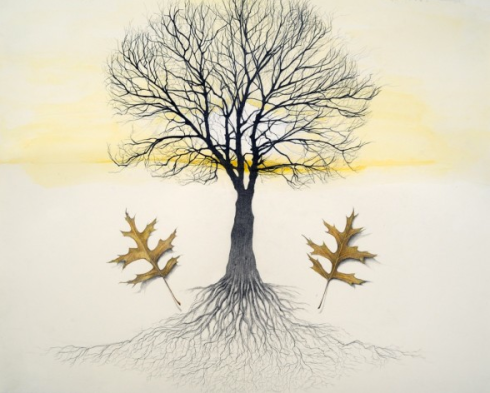 Inspiration for Family Tree was gleaned from many sources, in particular the art of Giuseppe Penone, David Nash, William Willis, and Bryan Nash Gill.  The ancient, enduring pines drawn along the top periphery were very directly inspired by similarly craggy trees I’d seen in paintings of the Upper Peninsula by Tom Uttech, and globe drawings of the Sespe wilderness by Russell Crotty.  Equally inspiring were these words from Eduardo Galeano’s ‘Green Memories’ entry in his incredible book, Children of the Days:

The wild animals, presented in silhouette across the outermost bark of Family Tree are all our relatives – or “mitakuye oyasin,” to borrow from the Lakota prayer of oneness and harmony with all living creatures.

DP:     You reference the influence of devotional panels on your own aesthetic, and there is a lovely devotional quality within your drawings. Yet there is also a strong sense of grief, an awareness of disappearance.

RC:     I’ve always been drawn to devotional panels, prayer books, and books of hours – but especially those by the 15th & 16th century Northern masters.  I’m moved by the intimacy, the honesty, and the purity of spirit that they convey.  There’s no other art that evokes the numinous for me in such visceral way.

Only two exhibitions have ever brought me to tears.  One was a small showing at the Van Gogh Museum in Amsterdam of Vincent’s pencil drawings, in particular his devastating Pollard Birches from 1884.  The other was curator John Hand’s 2006 exhibition at the National Gallery of Art in Washington, DC, Prayers and Portraits: Unfolding the Netherlandish Diptych, which included masterpieces by some of my favorite artists – Jan van Eyck, Robert Campin, Rogier van der Weyden, Hugo van der Goes, Albrecht Bouts, Quentin Massys, and others.

Upon walking into the gallery, what immediately struck me was the small scale of the panels, and yet the quiet power that emanated from them.  Here were these exquisitely rendered paintings, housed in lovingly constructed frames of highest craftsmanship, intended as objects for personal meditation and reflection.  Imagining the labor that went into each detail was cause enough for awe. But oh, those clear, rich pigments applied with such sublime subtlety! 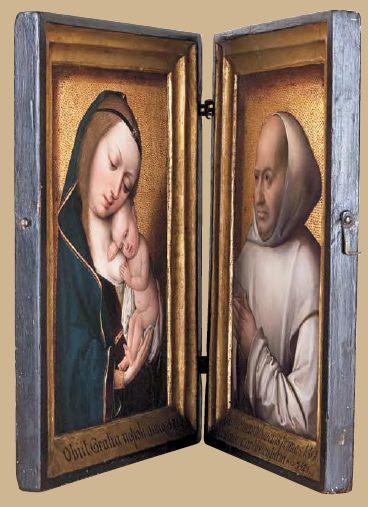 These are not gaudy paintings.  They are luminous.  The reward for slowing down, taking the time to peer into these encased worlds, and reflect upon the messages being conveyed is to walk away with a secret.  An inner glow.  Diptychs from this time were meant to be viewed, then closed and clasped shut, thereby demanding a personal and direct experience.  These are not showy objects for vainglorious display.

Many works from this period include the Latin inscription memento mori, ‘remember that you will die,’ often accompanied by skeletons, as a reminder to consider the vanities of life and the transience of earthly goods.  In the outer panel of his Braque Triptych, Rogier van der Weyden painted the skull of his patron, Jehan Braque, resting against a brick symbolizing the rich man’s industry in life.  On the inner panel is a portrait of the living patron.  Can you imagine that today?

OUTER PANELS OF THE BRAQUE TRIPTYCH

Unlike the more dramatic and emotionally charged religious paintings from the South, the art of the Northern Renaissance was reserved and reflective.  The subjects seem to carry a quiet acceptance of grief and resignation to sorrow.   It’s as if they possess some deep understanding of It All.  An acknowledgement that life is suffering.  It is very Buddhist, and in that sense – and you’ve only made me aware of it now – I suppose I’ve transferred that sensibility onto my own drawings.  “An awareness of disappearance” is a beautiful and appropriate phrase. 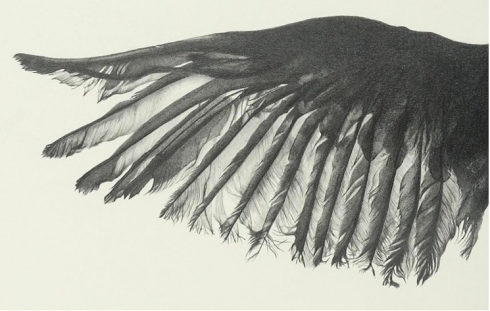 DP:     In the philosophy of deep ecology, there is the idea that rather than humans endlessly elaborating and imposing stories upon other forms of life, we need to refigure our connections to all living things, in ways that celebrate the natural world without consuming it for our own use, to advance our own narratives. Your work seems to embody an ethic of restraint, a conscious practice of withdrawal from the venal games and vanities of the contemporary art world.

RC:     My art is a reflection of my personal philosophy, which very much resonates with Deep Ecology. Drawing for me is an act of devotion and withdrawal.  It’s very personal.  I honor the natural world by rendering it truthfully, without embellishment or sentimentality.  Like haiku, the beauty is contingent upon what is left out, the negative space.  Which, I suppose, is a good metaphor for living: Less is More.

With the exception of two drawings from my Anthropocene series – Oblivion and St. Francis in the Age of the Sixth Mass Extinction – I avoid humans altogether.  We’ve celebrated ourselves enough during our brief and destructive time on this planet.  I’m grateful to DP for introducing me to the remarkable essay by Aldo Leopold Thinking Like A Mountain.  That says it all for me.  Humans are hell-bent on DOING, not BEING. It’s been one big ego trip. And now we’ve DONE ourselves in. 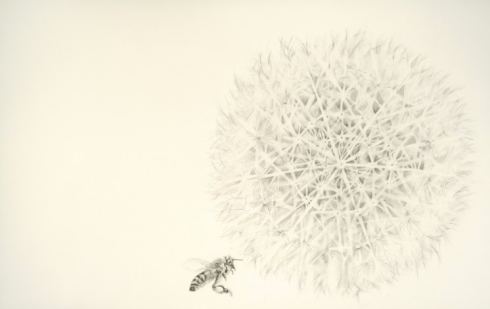 As for the venal games and ambitions of the contemporary art world, my BS detector immediately goes off when I read about yet another celebrity artist who is “speaking for nature.” Such arrogance!  Since the animals have no voice, they can’t object to these egomaniacs using their “cause” as currency. Environmental art has suddenly become hip and lucrative.  If you can sell your art for extravagantly high prices, while at the same time appear pure and make a Wall Street banker feel better about himself, well that’s a win-win, isn’t it!  But when you’re playing with the big dogs, you’re deep into the deadly game of unfettered capitalism, the ultimate goal of which is to destroy every living thing on this planet.

I hold very high standards for artists because I believe they should be the tribal mystics, the shamans, the truth-tellers.  We need those types more than ever today, and yet so many artists are lured by the glitter and gold of the corrupt contemporary art star world.  Remember that scene from Easy Rider when Dennis Hopper and Jack Nicholson are talking about the idea of ‘freedom?’  “… talking’ about it and bein’ it – that’s two different things, I mean, it’s real hard to be free when you are bought and sold in the marketplace.”   That’s the way I feel about mixing art and money.  It’s a slippery slope.  I maintain that art is a Gift – as in Lewis Hyde’s definition – and it should be cherished as such. 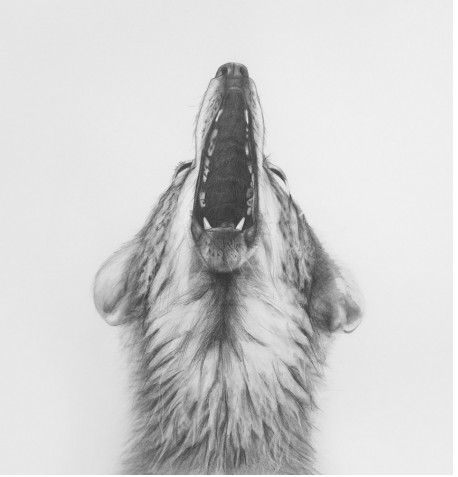 As far as my own art goes, I am still learning to think like a mountain.  Nature is the greatest teacher and, as long as it lasts, the lessons are free. I think Walt Whitman sums up how I feel about the world:

This entry was posted on Thursday, January 1st, 2015 at 00:18 and tagged with deep ecology art, interview DP Rebecca Clarke, rebecca clarke and posted in bearings, buoys. You can follow any responses to this entry through the RSS 2.0 feed.
« Sources of Joy
Somewhere Else »