Now comes poet-philosopher Christine Hume and her brilliant chapbook, Hum; a freely associative exploration of hums and humming that begins in her own voice, body and childhood, and then traverses a broad humography that includes everything from high school bleachers (site of many a hummer!) to the Sanskrit testimony of Allen Ginsberg at the trial of the Chicago 8.

Here at DP, we took careful note of Hume’s exceptional ear in her subtle celebration of the howls of wolves; now she brings the same acuity and wit to the underground/underbelly vibrations of the idiosyncratic hum, as it gives cover, runs interference, or keeps the distance swimmer on stroke. Hume understands how the voice begins with hearing, and overhearing, and hearing over and over; finding one’s own frequency amidst the din is not easy, and the search is likely to become unruly.

In a recent correspondence, Hume writes:

Some part of my voice went underground very early and a fractured perversion of it sometimes steals through, holds within it the unsayable and uncontrollable. I don’t want to recapitulate ancient history—a woman physically possessed and spoken through by the divine or demonic other, in oracular and ecstatic speech—but to speak, actually aloud, was often forbidden when I was a child. While others were having polite conversation, I was digging a ditch for speech. My voice doesn’t come when you call or go where I send it. It’s haphazard, serrated, bunched, unruly. It is physically interior, like a mobile, leaky, contorted organ.

When I was 12, I developed a hum, barely audible and non-volitional but persistent. Maybe I was secreting a fantasy body, or trying to rewire my voice, blocking out my family, or simply haunted. It was an underground sound in any case: a volley from the vibratory nether-reaches with the side-effect of alienating any human nearby. No one heard it as embodied intelligence or as extra-semantic expression, as I prefer to think of it now. Before this hum developed, I was raised in the manner of don’t-speak-unless-spoken-to. I was accustomed to hearing myself talk silently. Internally language pinballed and simmered —

Pinballs and simmers, oh yes, and then the writer’s voice emerges, with such deeply resonant harmonics. In the below excerpts (two images added by DP), Hume tracks a mysterious industrial hum as a figure of the machine that washes over and shapes our own sensoria in ways difficult to name or grasp: who’s there? 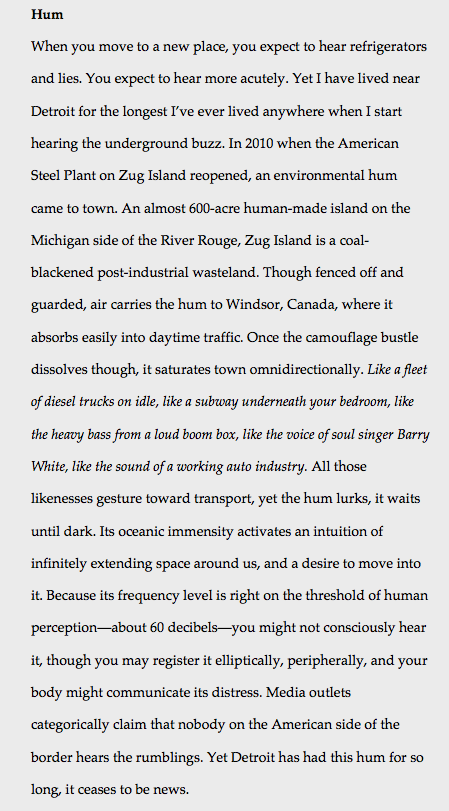 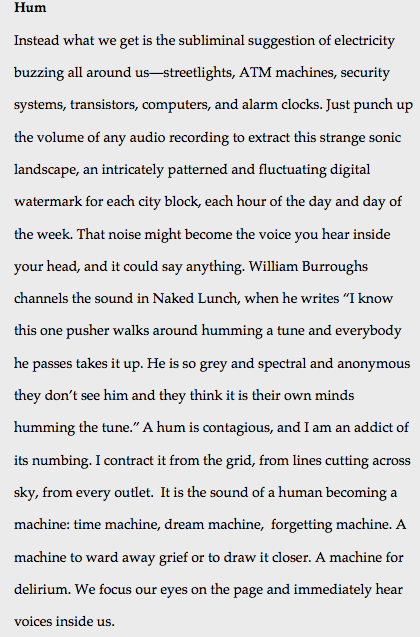 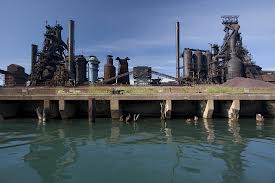 Listen to Hume’s Hum cover to cover, preferably while reading it out loud; the chapbook is available from Dikembe Press, linked to the cover image below.