Beneath the Golden Arches 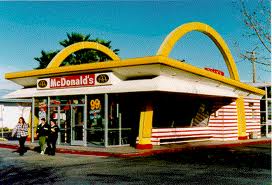 In his book The Lucifer Effect, psychologist Philip Zimbardo maps out what he construes as scientifically identifiable behavioral patterns running through examples that range from his own signature experiments with role playing cruelty in a Stanford University basement, to the imposition of a brutal regime of enhanced interrogation within the military prison of Abu Ghraib.

Along the road to his lengthy chapter on Abu Ghraib, under the sub-heading “Sexual Obedience to Authority”, Zimbardo recounts his version of a particularly repellent incidence of torture and sexual assault that took place inside the back office of a Kentucky McDonald’s franchise on April 9, 2004. Unfolding exactly three weeks before the photograph of a human pyramid of naked and hooded Iraqi prisoners would be published on the New Yorker magazine website, a homeland teenager was tortured and sexually assaulted for over three hours beneath the golden arches.

The torture was initiated by a telephone caller who identified himself as a policeman named Officer Scott. The caller told assistant manager Donna Summers that he was investigating a theft by a young woman wearing a McDonald’s uniform. He described her as a young Caucasian with dark hair and a slight build. Summers decided that this generic description fit her employee Louise Ogborn, a high school senior and Girl Scout with a stellar employment record. In Zimbardo’s account:

In a case in which I was an expert witness, this basic scenario then included having the frightened eighteen-year-old high school senior engage in a series of increasingly embarrassing and sexually degrading activities. The naked woman is told to jump up and down and to dance around. The assistant manager is told by the caller to get some older male employee to help confine the victim so she can go back to her duties in the restaurant. The scene degenerates into the caller insisting that the woman masturbate herself and have oral sex with the older male, who is supposedly containing her in the back room while the police are slowly wending their way to the restaurant. These sexual activities continue for several hours while they wait for the police to arrive, which of course never happens.

As an expert witness in a criminal trial and indeed as a consultant to McDonald’s, Zimbardo certainly would have reviewed the McDonald’s office surveillance videotape, and would therefore be expected to have a firm grasp on the facts of the “basic scenario” to which he alludes. Yet from watching merely the brief video excerpts that were included in an ABC television report released on November 10, 2005,  it soon becomes clear that while Zimbardo’s account may well serve the central thesis of his book, it does not serve the truth, nor does it do justice to the victim. Among the highly relevant facts omitted in his account:

1. The older McDonald’s employee that Summers asked to guard the teenaged Ogborn was named Jason Bradley, age 27. After a brief exchange with the caller, Bradley refused to participate, telling Summers it was “a lot of BS”. Though he did not intervene on Ogborn’s behalf, he refused to play along in her torture and assault.

2. The man Summers next called was not a McDonald’s employee at all, but rather a professional exterminator named Walter “Wes” Nix, who also happened to be her fiancé. In the video, he is shown to be a pudgy and balding middle-aged man; ABC television reported a weight of 230 pounds.

3. When the terrified Ogborn refused to address Nix as “sir”, the caller instructed Nix to spank her until she complied. Nix brutally spanked her for a full ten minutes, leaving numerous welts and bruises. Ogborn described her mental state to the ABC reporter: “My soul just left, my body just went numb to everything so I could just survive”. This is a classic description of survival dissociation, often experienced by victims of torture and sexual trauma.

4. Having received the ultimate reward of forced oral sex from a traumatized teenager, Nix suddenly became worried that he might have done something “very bad”, and told Summers he wanted out. The caller gave him permission to leave on the condition that Summers recruit someone else to take his place. Summers instructed the franchise maintenance man, Thomas Simms, to take over from Nix. After a brief exchange with Officer Scott, Simms – like Bradley before him – refused to participate. The scenario then quickly broke down, the caller hung up, and the line went dead.

With crucial facts that might interfere with his simplistic hypothesis conveniently omitted, Zimbardo asserts that everyone in the scenario is a victim of an authority in absentia behavioral pattern reinforced both by prevailing civic norms of obedience to the police and by the norms of a McDonald’s corporate culture that places strong emphasis on serving the needs of the customer, while also taking orders from above, without question.

As support for this superficial analysis, Zimbardo references a single book about the fast food industry written by a Canadian sociologist, which offers a fascinating account of certain aspects of the fast food industry, while shedding only the dimmest light on the extreme events that transpired inside this particular franchise. He also references Donna Summers, who said to a reporter, “You look back on it, and you say, I wouldn’t a done it. But unless you’re put in that situation, at that time, how do you know what you would do. You don’t.”

Yet Zimbardo’s situational dynamic actually explains very little of consequence in the torture and assault of Louise Ogborn, whose fearful obedience had nothing to do with encoded behavioral norms, and everything to do with the more visceral dynamics of power, violence, torture and survival. Using elementary techniques of manipulation, the man called Officer Scott placed a very deep itch into the ears of Donna Summers and Wes Nix and they ended up scratching it, with depraved abandon. Flooded with carnal stimulus, their reptilian brains took over. That was the “basic scenario”.

Nix pled guilty to sexual abuse, and was sentenced to five years in prison. Summers was fired from her job and placed on probation. Eventually, the police investigation resulted in the arrest of a corrections officer named David N. Stewart, who was married with five children. He was charged with impersonating a police officer and solicitation of sodomy. Even on such relatively minor counts, prosecutors were unable to secure a conviction. While the bodies in the office could be forensically established as facts, the voice on the telephone remained obscure and elusive. Nobody saw him in the phone booth, and there was no recording of the call, for definitive voice identification.

One small victory: a long line of similar calls appeared to end with the public outing of David N. Stewart as a sadistic disembody who preyed on the young work force of retail fast food. Yet despite this temporary lull, we are quite sure the idea of Officer Scott still vibrates somewhere inside an imagination that has yet to express itself, and where the idea lives, another voice will eventually follow, incarnate, as surely as the banished sun circles the earth. 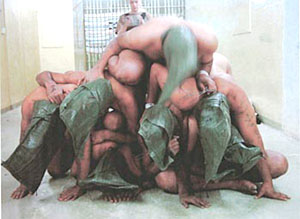 This entry was posted on Friday, January 13th, 2012 at 01:43 and tagged with Abu Ghraib, Crime at McDonald's, fast food phone hoax, homeland torture, officer scott, Ogborn sexual assault, Philip Zimbardo, The Lucifer Effect and posted in bearings. You can follow any responses to this entry through the RSS 2.0 feed.
« The Obedience Box
The Mean Maxima »