The Way to Heaven

During Gitta Sereny’s extraordinary descent into the mind and memory of Franz Stangle, former Commandant of Sobibor and Treblinka, she explores the question of whether he might have made small gestures of mercy, small actions that might have indicated a degree of resistance to the regime of extermination, and thus slightly alleviated the suffering of the victims. At one point during this slow, careful examination, Sereny asks Stangl what for him was the worst place in the camp:

Once naked, the prisoners not only became objectified; they also became more vulnerable and compliant, making the terminal stage – driving the mass of bodies up the barbed wire and pine branch “Himmelweg” (the way to heaven) directly into the gas chambers – easier for the SS guards to accomplish. Shame and sexual humiliation were tools just as powerful as the sticks and whips used to drive the objectified herd up the chute to slaughter.

Sexual humiliation of prisoners has also featured within the regime of psychological torture deployed by the CIA and US military intelligence following 9/11, often under the category of “exploitation of cultural sensitivities”. Shower cubicles at Guantanamo Bay featured glass fronts facing the central atrium, exposing the forced nakedness of Muslim prisoners.

Taken in conjunction with the increasingly invasive protocols of the TSA , the recent decision by the US Supreme Court regarding strip searches provides a clear signal that this regime is now ready for homeland distribution. Citizens who have been arrested – not convicted, but arrested – for even the most trivial offense, can now be sexually humiliated and invasively inspected, in order to safeguard the “rights and interests” of jails and prisons.

Here is an excerpt form a New York Times article, reporting on the case, that began with the arrest of Albert Florence, who was from the very first moment completely innocent of any crime: 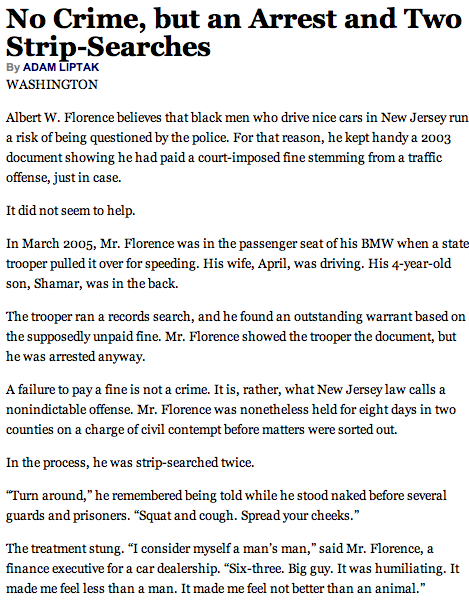 In his decision, Justice Kennedy wrote, “Every detainee who will be admitted to the general population may be required to undergo a close visual inspection while undressed.” The use of the word “detainee” is nothing short of ominous; it appears that Gitmo is coming home. How long will it be before our very own brand of himmelweg  takes shape?

In an interview for an article in the NJ Star Ledger, Mr. Florence stated, “I worry more so for my kids,” he said. “It’s something that I think we all — and I’m not talking about any particular race, or any particular class of people — but we all as American citizens should kind of come together and try and fight this thing.” 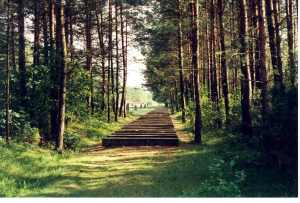 TRACES OF A NAZI DELIVERY SYSTEM

This entry was posted on Thursday, April 12th, 2012 at 12:30 and tagged with Albert Florence, Franz Stangl and Gitta Sereny, himmelweg, Psychological torture, sexual humiliation, strip search decision and posted in bearings. You can follow any responses to this entry through the RSS 2.0 feed.
« Pancakes and Worms
Dimly, Hard to Say Why »