Sorry for the Inconvenience

On Wednesday, April 25, Slavoj Zizek delivered an address at The New York Public Library titled “The Year of Dreaming Dangerously”, a year that will apparently include publication of his new book, Less Than Nothing: Hegel and the Shadow of Dialectical Materialism. On his publisher’s website, the book is described as a “long-awaited masterpiece”.  On the website of the New York Public Library, our tireless research staff found a prior reference to Zizek as “the Elvis of cultural theory”.

Unable to dispatch a reporter to attend his (sold out) lecture in person, we were grateful to find a synopsis published in the pages of The Guardian. In the midst of these remarks, he delivers the following caution to the Occupy movement: 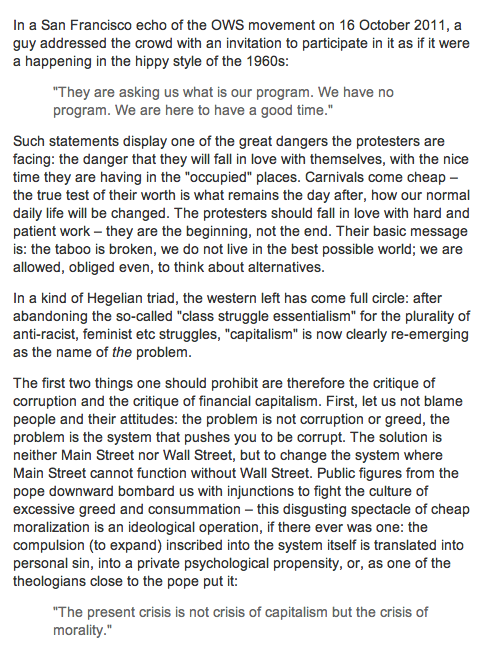 Here at Desperado Philosophy, we have had a difficult time digesting this strangely paternalistic passage. Is he saying that anyone who attempts to raise issues of personal accountability is part of some vast Papist conspiracy of obfuscation? Is he saying that individual acts of resistance, truth telling and integrity are meaningless; that because “the system” propels us to be corrupt, our individual actions and attitudes are of no consequence? Far from Hegel, this sounds a good deal like the crude situationist reductionism of Philip Zimbardo, in which the problem of conscience is wormed from the turf.

Is Zizek then also saying that the Occupy movement lacks seriousness because certain participants may be present on the scene for reasons of pleasure, connection and community? What if the experiences he wrongly dismisses as “the carnival” are absolutely central to “how our daily life will be changed”? Has Elvis left the building? Or is he just having us on? We know that Zizek loves a good joke, and indeed he closes his remarks with the following: 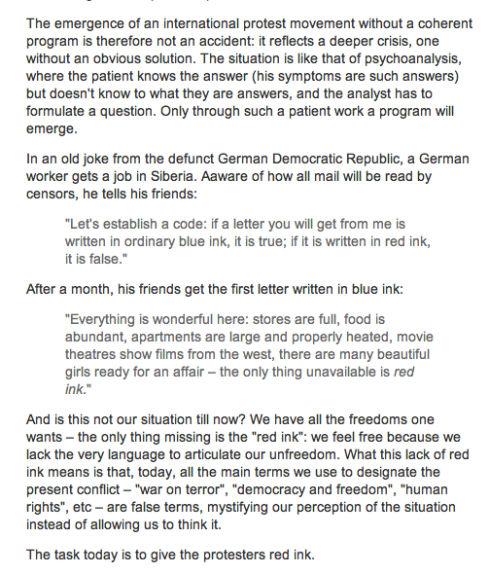 All very clever and amusing, but what does it mean? Is he telling the Occupy movement, whose media innovations have included the ingenious human megaphone, that what they really need is a medium of coded subterfuge, the red ink of a nod and a wink? Why?

True, we have never really understood the Zizek phenomenon, though from time to time we venture into his copious textuality in search of clues for what it is all about. Here is one little nugget dug from his own preface to The Zizek Reader:

This peculiar and self-indulgent pronouncement left us so befuddled that we convened an emergency staff meeting to meditate, mutatis mutandis, upon the fate of Paulinian materialists, wherever they may be. Yet this is the very same fellow who cautions the mostly anonymous participants in the purposefully leaderless Occupy movement not to fall in love with themselves? Sigh. (And could someone please email us an explication of  Zizekian “good terror”?) 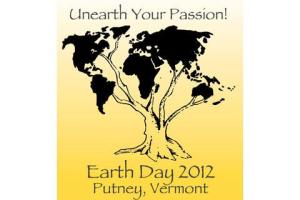 By contrast, on Sunday, April 22, Earth Day at Vermont’s Putney School, we attended a rather different sort of lecture, given by a different sort of man named Tom Wessels, whose subtle and profound books have nothing to do with wielding Lacanian tools to reactualize German Idealism. Wessels, who exudes the sort of joyful wisdom that comes from a lifetime spent in forests and in the mountains rather than at academic conferences and symposia mulling the End of Time and such, carried a rather different message.

Speaking without notes and entirely without pretense, Wessels urged the assembled Putney students, among whose ranks one would undoubtedly find delegates to OWS, to choose a life story of connection rather than consumption, and to choose commitment to community and the landscape over the narrow celebration of self. Referring to Black Elk Speaks, he pointed out that this New Story was in fact a very Old Story.

Since the prevailing story of consumption and possession of endless stuff is correlated with a high incidence of depression and anxiety often terminating in years of Lacanian analysis, Wessels also roundly endorsed having “a good time” while creating new forms of association and sustenance. Only through such good times can the Old/New Story gain heart, and life, and a future.

Though we neglected to bring our crack team of videographers to properly document the event, we discovered a video of the commencement  address given to the Antioch class of 2008, during which Wessels delivered essentially the same message, a message well worth repeating:

To close the afternoon, we then gathered around a piano to participate in one of the many beautiful rituals and traditions that make the school such a special place: sing. After having such a good time reconnecting with community and the landscape at Putney’s Earth Day carnival, we are confident that whatever future survives the present will be based in such joyful experiences, and not in the “good terror” of Slavoj Zizek.

This entry was posted on Thursday, April 26th, 2012 at 14:16 and tagged with OWS, Putney School, Putney School Earth Day 2012, Slovaj Zizek, Tom Wessels and posted in bearings. You can follow any responses to this entry through the RSS 2.0 feed.
« The Willful Child
The Answer My Friend »