“Doubts of all things earthly, and intuitions of some things heavenly; this combination makes neither believer nor infidel, but makes a man who regards them both with equal eye.”         – Ishmael, in Moby Dick

SKETCH OF TRANSIT OF VENUS 1769

With eyes to the sky, we note the last Transit of Venus for this century. The first documented observation of the transit is usually credited to the Cambridge sizar Jeremiah Horrocks from his home in Much Hoole, yet it is entirely plausible that the phenomenon had previously been observed by Babylonian and Chinese astronomers, and even by the Aztec king Montezuma, who derived authority from his affiliation with Huitzilopochtli, god of the sun, the hunt, and war. 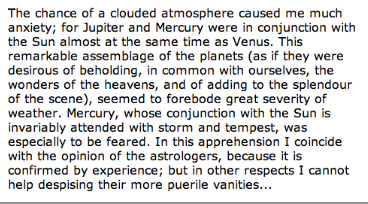 STAINED GLASS AT MUCH HOOLE

Since the transit occurs in the portentous year 2012, we would be remiss not to make note of the Mayan understanding of the planet Venus:

(Lamat Glyph, Venus), Chak Ek’ was the astronomical object of greatest interest, the Maya knew it better than any civilization outside Mesoamerica. In Maya myth, Venus is the companion of the sun. This no doubt reflects the fact that Venus is always close to the sun in the sky, rising not long before sunrise as morning star (Ah-Chicum-Ek’) or after sunset as evening star (Lamat). They thought it was more important than the Sun. They watched it carefully as it moved through its stations, it takes 584 days for Venus and the Earth to line up in their previous position as compared to the Sun. It takes about 2922 days for the Earth, Venus, the Sun, and the stars to agree.

The Maya made daytime observations of Venus. Venus had a psychological effect upon the Maya, it has been shown in the Dos Pilas staircase, that the Maya were timing some of their wars based on the stationary points of Venus and Jupiter, (The famous Star War between Tikal and Dos Pilas, Naranjo and allies). Humans were sacrificed on first appearance after Superior Conjunction when Venus was at its dimmest magnitude but they most feared the first Heliacal Rising after Inferior Conjunction.

In the Dresden Codex, the Maya had an almanac that displayed the full cycle of Venus. Venus cycles were the mean synodic Venus year of 584 days and a “great cycle” of 37960 days (the lowest common multiple of the Tzolkin, and the Venus year, equal to 104 calendar years or 2 calendar rounds). In Rio Azul’s tomb 19 the Lamat or Venus Glyph is beautifully painted. A “star war” is a full-scale war planned in accordance with specific astronomical events, usually the first appearance in the morning sky of the planet Venus. The heliacal rising of the brilliant “star” in the pre-dawn sky was considered by the Maya as a highly evil portent. As such it was an appropriate herald of warfare, at least on the part of the attacker.

These would appear to be among the intuitions of “some things heavenly” worthy of our attention.

This entry was posted on Tuesday, June 5th, 2012 at 10:24 and tagged with ishmael some things heavenly, Jeremiah Horrocks, mayan venus glyph, Venus in Transit and posted in bearings. You can follow any responses to this entry through the RSS 2.0 feed.
« Come, Thick Night
The Human Snake »