In September 1987, following the death of Rudolf Hess, wrecking crews demolished Spandau Prison, beginning with the careful removal of all windows. Fearing that the site would otherwise become a magnet for neo-Nazi sympathizers, the allies proposed a parking facility and enclosed shopping center as the optimal fate for the site.

{Prior to his incarceration at Spandau, Hess had been detained in other facilities, including a stint of three days inside the Tower of London, yet despite its evident potential to become a neo-Nazi shrine, the Tower has never been slated for demolition.}

Though offers of one hundred marks for a single brick were common, the disposition of debris from the Spandau demolition was scrupulously controlled: materials were pulverized and either buried at a Royal Air Force airbase or dumped into the North Sea. The small garden house where Rudolf Hess had been found, asphyxiated, an electric cord around his neck, was among the obliterated buildings. The official pronouncement that Rudolf Hess had committed suicide at age 93 has been challenged from the very first day, most passionately by his son Wolf.

When Wolf Rüdiger Hess was born in 1937, Nazi Gauleiters throughout Germany were instructed to send a handful of soil, handfuls that created an earthen setting for the cradle that rocked the newborn Wolf, a symbolic affirmation that this special child, the child of the deputy Führer, would begin life in touch with the entire German Lebensraum, including an envelope of dried horse manure sent from Berlin by Nazi semiotician Joseph Goebbels.

By agreement between the various allied governments and Wolf Hess, and in accordance with a request in his own will, Rudolf’s remains were transported to the small Bavarian town of Wunsiedel, where his parents were also buried. The grave soon thereafter became the magnet that the erased prison could not provide. Each year, thousands of neo-Nazi’s converged upon Wunsiedel on the anniversary of Hess’s death.

In 2005, a court order banning extremist assemblies had little effect; a member of the Lutheran church council, Hans-Jürgen Buchta, said  “The whole town was shut down and in turmoil and there was a huge police presence. We here at the graveyard were not always able to cope.” Thus Mr. Buchta and his fellow churchmen made the decision to terminate the lease on the grave upon expiry in October, 2011. Subsequently, in July 2011, through “an operation not open to the public”, Hess’s remains were exhumed and the large granite gravestone was removed. On July 22, cemetery administrator Andreas Fabel said: “The grave is now empty. The bones are gone.” The mayor of Wunsiedel, Karl-Willi Beck, was quoted on the same day: “It was the right thing to do.”

The bones were then cremated and the ashes scattered at sea, where one imagines they might have reunited with his pulverized cell at Spandau. We have been unable to determine the fate of the impressive monument. Was it pulverized and dispersed as well, or simply ground down and recycled to commemorate one of Wunsiedel’s more favored residents?

The inscription on the stone read: ICH HAB’S GEWACHT, or “I have dared!”, quoting the fascinating sixteenth century knight, poet and scholar Ulrich von Hutten, who contributed to the wickedly satirical Epistolae Obscurorum Virorum, and who was a sharp critic of Germany’s ties with the papacy. Von Hutten favored a return to the age of chivalry, spiced up with a large dose of Protestant heresy. He died in seclusion on the Lake Zurich island of Ufenau, apparently from “the French disease” (syphilis ), leaving an estate that consisted of a pen purported to have been his sole earthly possession.

The full context for the von Hutten quote in English would be:

With open eyes I’ve dared it

And do not feel regret.

Though I should fail to conquer

True faith is with me yet.

The second line resonates with Hess’s closing statement at Nuremburg: Ich bereue nicht”, usually translated as “I regret nothing”; “I repent nothing” would be an alternative. To the end, Hess claimed that his mission to Scotland was a sincere effort to secure peace, and that he was entirely ignorant of the holocaust, a self-understanding vigorously defended and promoted by Wolf Hess until his own death in 2001. In 2011, evidence came to light that would appear to support at least some of the younger Hess’s claims.

A simple stone marker on the island of Ufenau designates the grave of Ulrich von Hutten; to the best of our knowledge, Ufenau has yet to become a magnet for any sort of extremist pilgrimage: 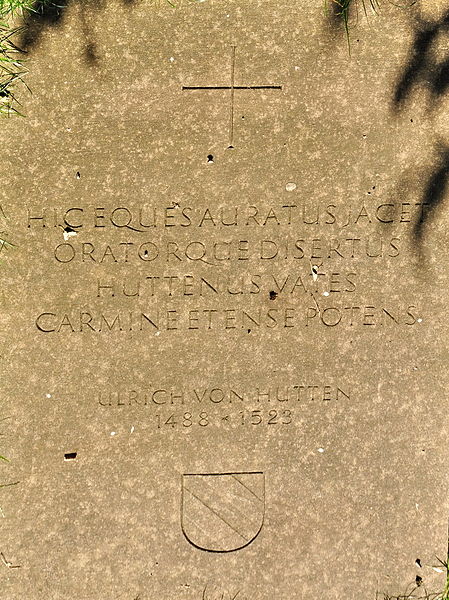 This entry was posted on Saturday, June 30th, 2012 at 21:30 and tagged with Hess exhumation, ich bereue nicht, ich hab's gewacht, Rudolf Hess, Spandau demolition, Ulrich von Hutton, Wolf Hess and posted in bearings. You can follow any responses to this entry through the RSS 2.0 feed.
« Such is the Depth
The God Particle »