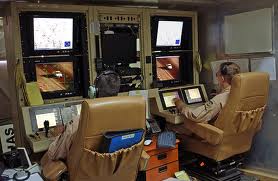 In 2010, philosopher Bradley Jay Strawser published an essay titled “Moral Predators: The Duty to Employ Uninhabited Aerial Vehicles” in the Journal of Military Ethics. The key passage, slightly reformatted below for clarity, reads as follows: 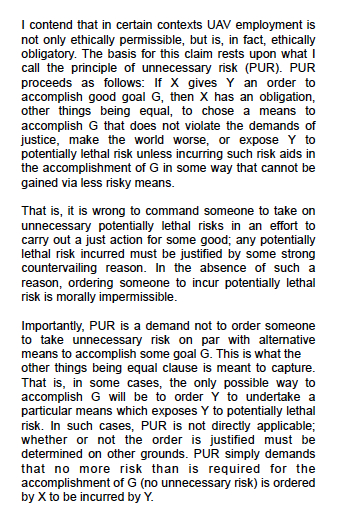 During a recent interview with a correspondent from the Guardian newspaper, Professor Strawser, who now teaches at the elite Naval Postgraduate School, summarized his position as follows:

He also asserts that drone warfare permits greater transparency and accountability, since each deployment is recorded for later analysis:

Yet if such normative gain is achieved outside juridical oversight, then Strawser’s PUV does not meet its own obligation to “the demands of justice”. Where there is no law, there can be no accountability, and evidence for the extralegal murder of non-combatants through the use of UAVS is compelling and well documented. While UAVs project the illusion of greater precision and accuracy, recent historical experience on the ground has presented us with more “downside” than even the upbeat Professor Strawser would wish to accommodate, by his own ethical and philosophical standards.

UAVs are only as accurate as the intelligence gathered regarding human targets, intelligence that is inherently ambiguous, above all in highly complicated regions such as Waziristan. Accuracy and precision of delivery for the lethal force becomes morally repugnant when the target turns out to have been innocent, misidentified as a result of tribal or family feuds, or by in-fighting among various intelligence agencies.

Further, Strawser’s PUV appears to imply that the single driving motivation for the development and increased use of UAVS has been reduction of risk for pilots. Yet the actual motivations shaping drone use have been more complex, including their psy-ops value as exemplary instruments for the strategic doctrine of Shock & Awe.

Finally, physical, visceral confrontation with battlefield carnage remains among the few reliable deterrents to armed conflict, as each generation learns, over and over again, that War Is Hell; with only the “moral predators” of remote controlled UAVs to bear witness to the chaos, we can be sure that the war will go on and on … forever. Maybe that is the deeper play?

We note the following quote on the home page of Professor Strawser’s website:

“Two things fill the mind with ever increasing wonder and awe, the more often and the more intensely the mind of thought is drawn to them: the starry heavens above me and the moral law within me. Morality is not properly the doctrine of how we may make ourselves happy, but how we make ourselves worthy of happiness.”

This entry was posted on Friday, August 3rd, 2012 at 14:07 and tagged with Bradley Jay Strawser, ethical issues of UAVs, moral predators, shock and awe, the forever war and posted in bearings. You can follow any responses to this entry through the RSS 2.0 feed.
« Sans Soleil
Bones to Philosophy »