Fairly early on in his memoir Inside the Third Reich, Speer reconstructs the dialogical genesis of his Theory of Ruin Value:

We note that it is the conscience of a future Germany that would be the subject of such monumental messages. But let us not get stuck in mnemonic mud, for Speer trudges ever onwards to the Zeppelin Field:

For the purposes of imperial memory, above all an empire which dreams of virtual eternity, present buildings have diminished utility if they fail to project heroic decadence for posterity. Shortly after these invigorating discussions, Hitler would appoint Speer as a department chief on the staff of his Deputy Rudolf Hess, who would later provide Speer with moral support for his imaginary “walk around the world”.

THE LAW OF RUINS

In a recent post delivered from inside his well-crafted Charnel-House (with a nod to Corbu),  Ross Wolfe invites our rumination thusly:

Wolfe then goes on to discuss the “futureless present” theorized inter alia by the Italian Autonomist and desperado philosopher Franco (Bifo) Berardi, whose analysis might best be conveyed graphically by these two Occupy posters {as documented in the Charnel-House} : 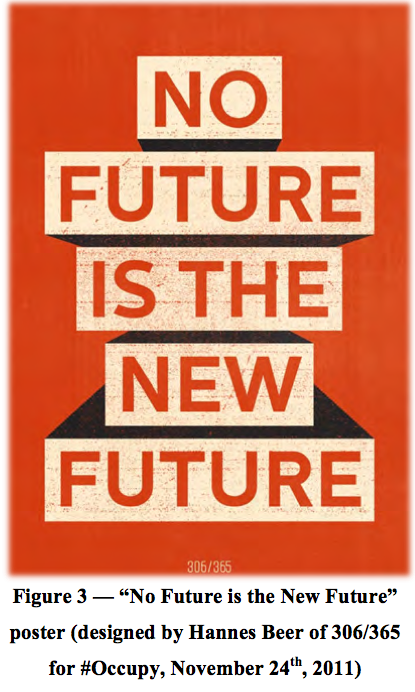 Towards the end of his lengthy post (downloadable as a PDF), Wolfe quotes Owen Hatherley from his book-manifesto Militant Modernism:

With this in mind, we turn to the webiquitous images of a No Future ou topos; the abandoned Chinese theme park known as Wonderland. Typically discounted as a folly of central planning, or as fetish-evidence of the perverse malinvestment that runs riot during global credit bubbles, perhaps Wonderland offers a hint of things to come for those who wish to contemplate the interior architecture of some future conscientia.

And for those intemperate pilgrims who hunger for the ultimate “no place”, take heart, for we are getting there at a speed which guarantees a truly spectacular final act. 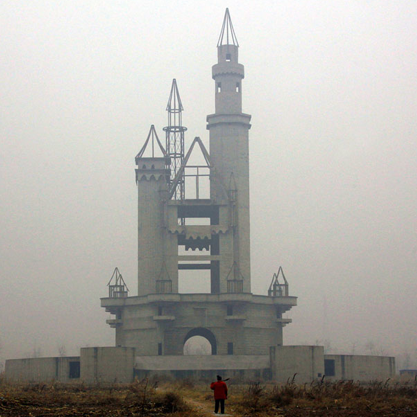 MODEL FOR AN EVISCERATED HISTORY

This entry was posted on Wednesday, August 15th, 2012 at 13:04 and tagged with bifo, chinese wonderland, chris marker, hitler ruin value, no future occupy, owen hatherley militant modernism, ross wolfe memories of the future, speer theory of ruin value and posted in bearings. You can follow any responses to this entry through the RSS 2.0 feed.
« Made Out of Meat
We Are the Dark Side »