Foremost among his concerns: the gradual migration of torture from a zone of absolute moral rejection into a zone of programatic resignation. Such a migration provides political support for a climate of legal impunity, which in turn fosters a darkly fertile breeding ground for fresh generations of torturers.

The text is worthy of extensive citation, with a few DP editorial images (with links to essential supporting documentation) affixed:

Mr. Méndez’s cautious optimism regarding eventual abolition is laudable, though he would likely agree that the evidence so far this century describes a descent into ever darker shades of moral relativism, and into a cynical-fatalistic acceptance of “inevitable” human brutality. (His declaration that slavery has been universally abolished also strikes our ear as somewhat premature.)

Mr. Méndez proceeded to remind the assembled dignitaries that the 1984 Convention Against Torture affords zero wiggle room whatsoever to the self-appointed pragmatists:

Plausible deniability offers a mode of transport to convey torture away from the tight box of unqualified rejection and into the vast boglands of national security, into which any lingering moral qualms instantly sink.

Recent research on trauma suggests that psychological torture inflicts injuries to the brain, psyche and soul of the victim. One could then make a persuasive case that any prison  environment which creates sensory disorientation through the total control of stimuli functions as a de facto torture chamber. 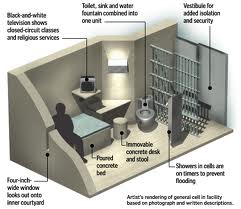 “Very disappointing” indeed, for a country that still pretends to be the global standard bearer both for the rule of law and for the defense of inalienable human rights. Such a position is not without consequences, and relies upon a ceaseless suppression of historical fact:

REDACTION AS A BLACK SITE

The breeding ground created by the legal impunity granted the architects of state torture in the early years of this century will undoubtedly hatch a new breed of operatives able to break the will and psyche of fellow human beings. Yet there will be other offspring , too – in the genus of “unknown unknowns”. Like this, step by slippery step, we descend into the dark.

This entry was posted on Thursday, November 8th, 2012 at 22:12 and tagged with breeding ground torture, moral relativism torture, pragmatic torture, prison torture supermax, special rapporteur torture Méndez, torture US impunity, UN convention against torture and posted in bearings. You can follow any responses to this entry through the RSS 2.0 feed.
« Take the Square
The Unblinking Eye »