We do not normally concern ourselves with clownish parodies of wrath, yet for the odious Donald Trump, we must make an exception. It seems that The Donald wishes to fire all of Scotland after the unruly Scots elected Michael Forbes as their “top Scot”, in an annual award sponsored by the distillers of Glenfiddich malt whisky.

Mr. Forbes has become well known in recent years for his refusal to cast his small farm into the black hole of Mr. Trump’s vision of the future – an endless golf course flanked by casinos, jetports and McMansions. Despite Mr. Trump’s furious attempts to defame, intimidate and ridicule, Mr. Forbes would not be shoved off his land. 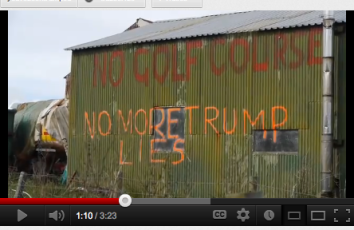 To which the infinitely vain Mr. Trump tweeted, via that medium which so perfectly fits his temperament:

Yes, Mr. Trump, Michael Forbes has indeed been a louse in your bonnet, and we thus offer you Robert Burns’ famous ode to said lowly beast, read by a DP Kindred Spirit:

O FOR SOME RANK, MERCURIAL ROZET

In an interview published on the “Green” blog of the New York Times this past August , Anthony Baxter, the director of the film You’ve been Trumped, made the following assessment of the story as it continues to unfold:

NOT THEIR CUPPA TEE 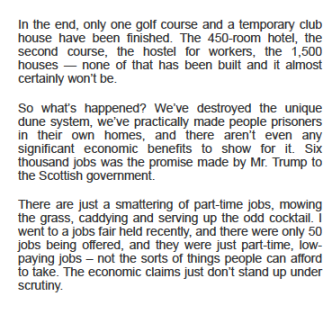 We favor the western island malts here at DP, yet we shall crack a bottle of Glenfiddich and drink a few toasts to Top Scot Mr. Forbes, and to all those who stubbornly stand their ground in the face of vanity. As for Pennywise Trump, he would do well to meditate upon another poem:

This entry was posted on Thursday, December 6th, 2012 at 14:15 and tagged with michael forbes, ozymandias, to a louse, top scot award, trump aberdeen golf course, trump as evil clown and posted in bearings. You can follow any responses to this entry through the RSS 2.0 feed.
« Toxic Mockery
Tempered in Hell »