How Hard It Is To Sing

We pause today to commemorate the “other” 9/11: the 1973 overthrow of the democratically elected government of Salvador Allende in Chile by a brutal military junta led by General Augusto Pinochet, and supported by Henry Kissinger.

Among those detained in the National Stadium on the first day of the golpe: folksinger and activist Victor Jara. Before he was carried away to be tortured and murdered — his wrists broken, and his body riddled by forty two bullets — Jara was able to write the lyrics for one final song on a scrap of paper. As his widow Joan records in her detailed memoir, An Unfinished Song:

In Joan Jara’s own translation into English, here are the lyrics for Victor Jara’s final song: 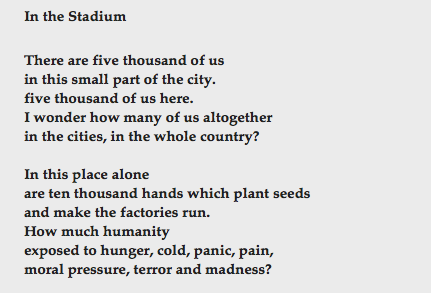 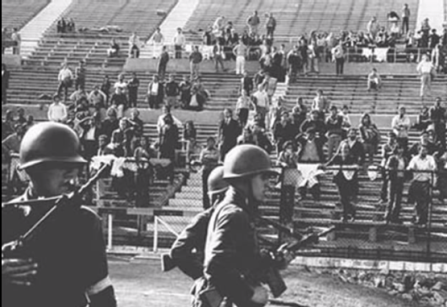 THE NATIONAL STADIUM ON THE DAY OF THE COUP

A NATIONAL STADIUM EXIT PASSAGE AS IT READS TODAY

This past July, nearly forty two years after the coup, a judge finally brought charges against ten former officers in the Chilean military, for the murder of Victor Jara. Henry Kissinger remains at large.

This entry was posted on Friday, September 11th, 2015 at 11:52 and tagged with in the stadium jara, joan jara unfinished song, kissinger pinochet, the other 9/11, victor jara and posted in bearings, DP. You can follow any responses to this entry through the RSS 2.0 feed.
« Terribly Quiet
Lebensraum and Genocide »