Slightly over a week ago, the White House press secretary Sarah Huckabee Sanders, asked to justify the unconscionable separation of immigrant children from their mothers, stated that “it is Biblical to enforce the law.” With her words fresh in mind, we turn this week to philosopher Catherine Malabou, with excerpts from a recent essay titled Repetition, Revenge, Plasticity.

Images are from Gerhard Richter, three paintings completed in 1988, each one titled Tote (Dead). 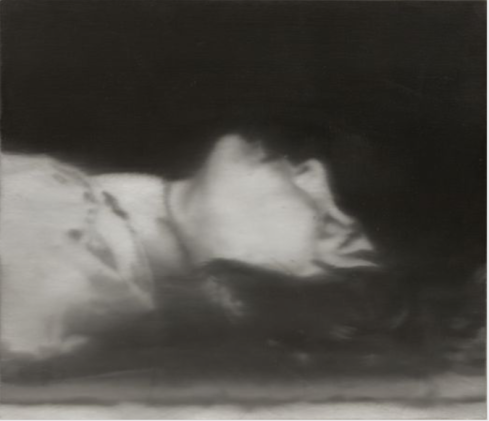 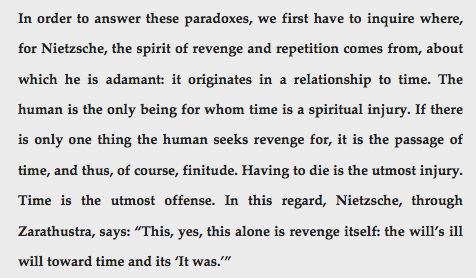 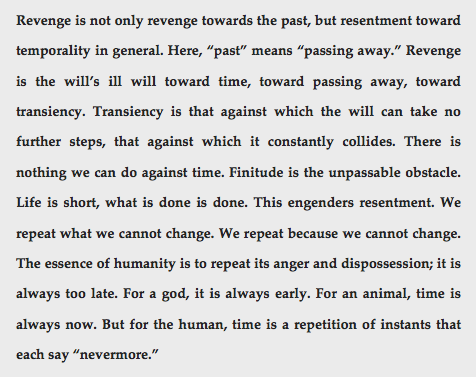 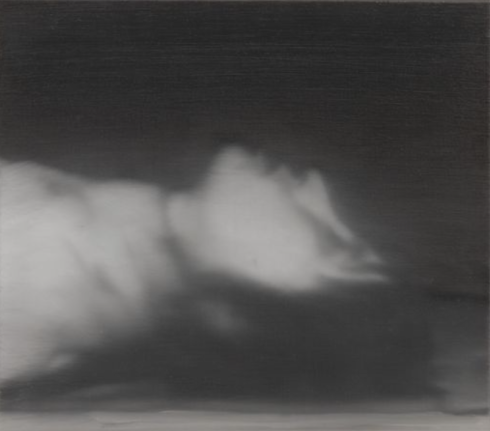 Regarding the three Totes, we find the following explication on the Richter website:

The three paintings are based on photographs depicting the terrorist Ulrike Meinhof, a founding member of the Red Army Faction, that were taken after her suicide in prison in Stuttgart-Stammheim on 9th May 1976. The images were published in the magazine stern on 16th June 1976 and show close-ups of the head and upper body of a lying woman, whose eyes and mouth are partially open. Her dark hair is almost undistinguishable against the dark background whereas the bright clothes and pale skin of her face brightly stand out. Her somewhat overstretched neck reveals a dark deep line left by the noose.

The three works show an almost identical image segment with only the angle and the proportions varied slightly in each painting. Besides their format, the three images also vary in their painterly execution. While the facial features of Ulrike Meinhof are relatively clear in the first version of Dead, they are blurred almost unrecognizably in the last painting, with bright and dark shades merging, contrasts paling and the overall black background fading to a uniform dark grey. Moreover, the position of the head seems to be slightly altered in each version. While the first painting is guided clearly by the original photograph, the second version shows the head with a slightly raised chin and the eyes almost completely closed which is carried forward even further in the third work. Because of the increasing blurring and the changing position of the head, Ulrike Meinhof seems to be removed further and further from reality with every painting, her mouth and eyes seem to close slowly. In death, she is withdrawn from the gaze of the public, the terrorist is given back a part of her human dignity that was taken from her by exhibiting her dead body in mass media. At the same time the dramatic effect is increased by the multiplication of the subject and the increasing blurring of details that seem like a cinematic fading out. The dead body seems to sink into the surrounding, impenetrable grey.

The three likenesses appear like a search for an appropriate way of representation, carefully and gradually approaching death. The distinct close-ups set the paintings apart from other depictions of dead RAF members in the cycle and create a certain intimacy that affiliates the work with Youth Portrait [CR: 672-1][7]. Furthermore, Meinhof’s apparent isolation and loneliness are underlined by focusing solely on her face and upper body. In regard to iconography, the body lying parallel to the image plane is evocative of representations on predellas and hence creates a connection to a traditional European iconography of death. This prevents the paintings from being seen as ideological images or to turn into icons of martyrs. Instead, the works pose the question as to the why of the events. As no other painting in the cycle the painting speaks of sadness, and “[…] sorrow, […] sorrow for the people who died so young and so crazy, for nothing.”

This entry was posted on Saturday, June 23rd, 2018 at 16:50 and tagged with justice as revenge, malabou, richter, zarathustra and posted in bearings, DP. You can follow any responses to this entry through the RSS 2.0 feed.
« America Embodied
Hold Still and See »