A trusted foreign correspondent has brought to our attention a Moscow Times report on a novel explanation for the dramatic increase in forest fires throughout southern Europe. Former KGB henchman Alexander Bortnikov, presently a key member of the Putin crony capitalist consortium, blames Al-Qaida terrorists for the wildfires. At a recent “security services conference” Bortnikov said:

Nicolai Schmatkov, the forest policy director for the World Wildlife Fund, dismissed the notion out of hand:

Other factors might include climate change; the reduction of rural fire-fighting teams; and a dramatic reduction in grazing animals in Spain and Portugal, the latter a trend that may soon reverse, as workers formerly sucked into the whirlwind of speculative construction return to working the land. 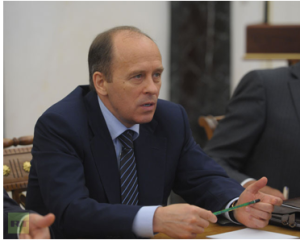 Mr. Bortnikov’s long service in the KGB supports a preference for projecting the most sinister conspiracies from a few discarded cigarette butts. Indeed, his concern about fire in southern Europe appears to be nothing more than cover smoke for his eagerness to suppress hot spots closer to home, as indicated elsewhere in the same speech:

Population radicalization comes in many flavors, and the suggestion of a “forest jihad”, unhindered by the lack of credible evidence, has certainly spread like wildfire within the Islamophobic tinderboxes of the internet:

And even from within our moderate northern neighbor (left unedited, for your consideration): 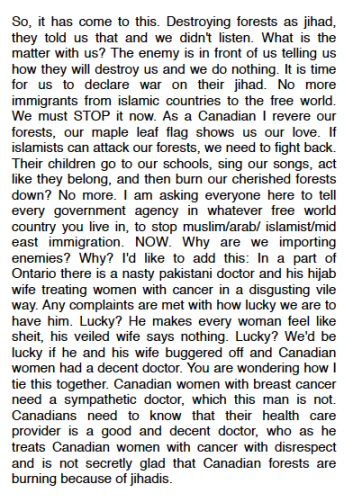 As the economic crisis in Europe and North America deepens in years to come, with the subsequent currency wars and currency debasement, we urge contemplation of a graph that charts the relationship between inflation and demonization during the “Witch Craze” of the 17th century in England. 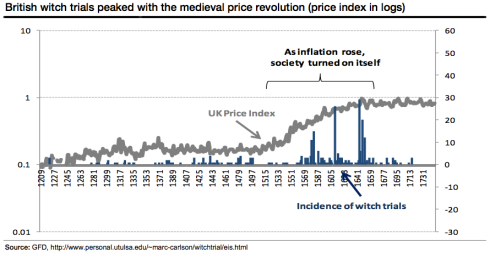 EVERY PRICE ‘REVOLUTION’ HAS ITS PRICE

The experience of the Weimar hyperflation, skillfully reconstructed and analyzed in Adam Fergusson’s classic study, When Money Dies, reveals the same dynamic relationship between inflation and the “enemy within”, with even more deadly results.

How many will be rounded up and thrown into the vast fire pit, this time around?