From Data Stream the Delusions

Every now and then, we stumble quite innocently across sentences that reveal a level of philosophical, historical and cultural vacuity so abysmal that we are left dumbstruck; we sit very still in complete silence for a few long minutes, eyes squeezed shut, and hope that the sentences will go away. Alas, they never do.

So it was, early this morning, when we came across two quotes in an article about the disappearance of urban anonymity, written by the always interesting Quentin Hardy in the “Bits” blog of the New York Times. Hardy brings a man named David Friedberg into the mix; the CEO of a data mining company named Climate Corporation, bought last year by Monsanto.

Mr. Friedberg is, unsurprisingly, an enthusiastic pom pom boy for data aggregation, above all in the “agricultural space”. The Climate Corp. business model is simple: hoodwink farmers into “sharing” their data with Monsanto, and then cram all sorts of toxic products down their throats.

The sentences that make us fear that our dim view of the future for the human species may be wildly optimistic read as follows: 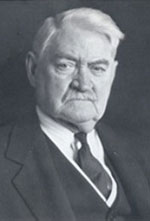 JFQ: SUCH A SWEET MAN

Monsanto was founded in 1901 by a man named John Francis Queeney with capital provided by the Coca Cola company, holder of one of the most closely guarded industrial secrets in the history of commercial brands. Coca Cola was also Monsanto’s first major customer, purchasing vast quantities of the artificial sweetener still known as Saccharin.

In time, the company would become the single largest global producer of immensely profitable PCBs, while simultaneously launching a sustained campaign to keep certain data secret, in truth asking the public to accept the safety of Monsanto products on faith. This pattern has been repeated so many times that it surely qualifies as the company’s core competence. Towards the ends of such “empowerment”, Mr. Friedberg and his technologically enhanced miners contribute their pungent loads of ore.

A concise yet copiously documented history of Monsanto’s talent for twisting data into manufactured truth can be found here.

Greed, once unleashed, works in mysterious ways, and it may well become the case that the nature of the data mine will eventually wipe out all the miners. Such is the implication of another excellent entry to the “Bits” blog, this one contributed by Nick Bilton, who investigates the use of bots to distort the digital data mine. Consider the bot-maker Swenzy, and its own cheerfully amoral CEO, who wishes to be identified only as Simon Z.: 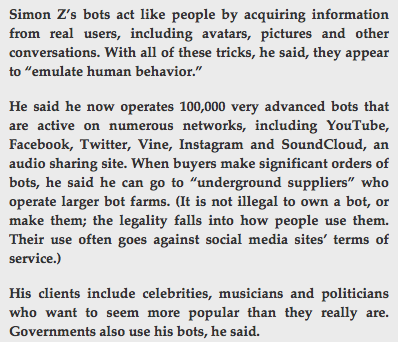 ON THE PATH TO A MORE TRUTHFUL SOCIETY