Now That We Know

WATCHMAN, WHAT OF THE NIGHT?

The looming of DP began with two images from 2011: the vicious pepper spraying of a small group of students who were attempting to slow the transformation of their university into a delivery system for banking services; and the pinched face of Jon Corzine, who had engaged in what seemed a massively fraudulent transfer of wealth from the many to the one – himself.

As of this writing, the recipients of the large dose of oleoresin capsicum have been awarded a million dollar settlement for their troubles, while Mr. Corzine remains at large. We hereby nominate Jon Corzine as the Poster Boy for our increasingly bifurcated legal system, one where the poor receive instant incarceration while the rich pay fines or make donations to the coffers of political campaigns, and then return with impunity to the Grand Casino.

For much of the year, we have been digging into the deformed conscience of the American imagination; forensic archaeology in search of clues for how a republic founded on the celebration of life, liberty and the pursuit of happiness could transform itself, all too seamlessly, into a rogue state that sanctions torture and remote control murder, executed in the name of “national security”. What begins in secret rendition and foreign black sites gradually becomes domestically mainstreamed, with the treatment of Bradley Manning offering a transitional experiment in how much the sleepwalking American public is willing to accommodate.

In this final DP post for 2012, we submit a montage of excerpts from an excellent essay by the tenacious and skilled attorney Gareth Peirce, author of Dispatches from the Dark Side: On Torture and the Death of Justice: 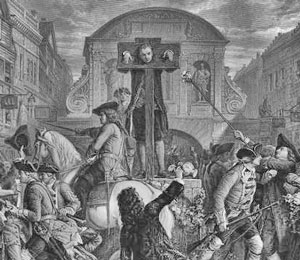 EARLY EXAMPLE OF A STRESS POSITION

By reviewing the 17th century case of the revolutionary Leveller John Lilburne (“Freedom John”), Ms. Peirce urges our consideration of the deep relationship between the rejection of barbarous and tyrannical treatment of individuals and the development of due process:

IN TORTURE WE TRUST

Fundamental to both the English and the American revolutions is the Leveller conviction that basic human rights are inalienable:

Memory is short, when the political body floods itself with rage, or racism, or the hunger for revenge:

Acting through whatever remains functional within the legal system, a handful of individuals forced the truth to the surface, documenting a wide range of abuses suffered by often completely innocent captives at Guantanamo Bay and other “facilities”: 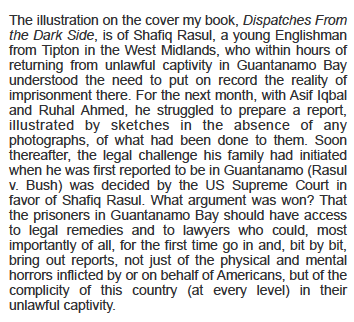 Ms. Peirce closes with the question that is also our question, as we look ahead to 2013:

Leave a comment   |  tags: gareth peirce, how do we respond to torture, john lilburne, sartre and algerian torture, tipton three, torture as entertainment?, why do we torture | posted in bearings