Amidst the cacophony of a malignant regime finally exposing its white supremacist core, we bend an ear to professor Manisha Sinha, historian of slavery, abolition, Civil War and Reconstruction and the author of The Slave’s Cause and The Counterrevolution of Slavery.

Excerpts from a recent interview below; caption to the image added by DP. 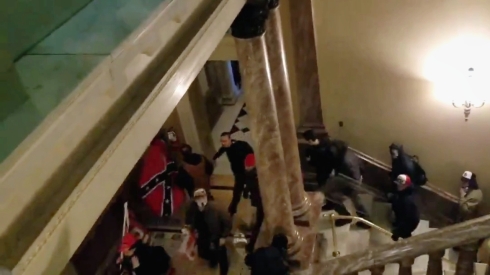 During the largely peaceful BLM protests, Trump declared that anyone damaging federal property would be charged with felony riot and face the possibility of ten years in prison.

Let us see what punishment shall be deemed appropriate for the racist & deluded berserkers who ransacked the capitol, and for those who incited and praised them as “patriots”. Of all the lies spewed forth from the twisted MAGA delusion machine, surely that is the most repugnant – yet.

We close with the glorious voices of the Resistance Chorus, with luminous Rhiannon Giddens in the mix: