The Answer My Friend 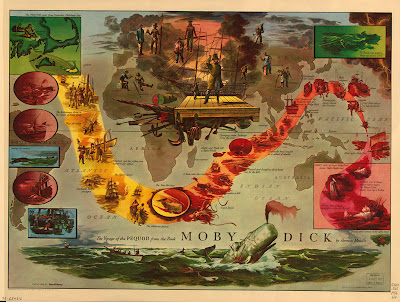 Chapter 44 of Moby Dick finds Ahab in his cabin, fighting a vicious headache. Having announced the target of his predation to the Pequod’s crew, he now suffers from the inescapable fact that he cannot specify where Moby Dick rolls, sounds and wallows. At this moment, what heaps and tasks Ahab is not some abstract inscrutable malice but rather the whale’s carnal invisibility.

Even when given golden incentive through the doubloon nailed to the mast and entranced by their captain, the lookouts in the topmast can only scan a single migratory vein, with even such limited scrutiny possible only when weather conditions are optimal. The masts of the scattered fleet are not linked into a network of fixed haliographs, such as the one devised in a later decade by General Nelson Miles during his hunt for the most wicked indian who ever lived; nor are they able to transmit radiophonic signals, no matter how much lightning they may inadvertently conduct.

Unlike terrestrial hunting where the environment is stable and where the hunter might also remain silent and still while waiting for prey to roam into range, whaling is a hunt where all the variables are constantly in motion: the ocean is moving; the whales are in motion, sometimes with the currents, but often not; and the whale ship is in motion, too, dependent on winds that may or may not favor the systematic tracking of probable – but never definite – migratory patterns. Thus Ahab bends over his charts:

The charts store information about seasonal migrations and feeding patterns, and also identify specific sightings of Moby Dick, not only in his own past voyages but also those encounters recorded in the stories of his fellow captains in the whaling fleet. Sifting, weighing and balancing all these variables and probabilities inside his head, Ahab ultimately seeks to transform the pencilled vectors of his charts into a fountain of whale blood.

Let us now move away from the dark vortex of Ahab’s headspace and consider the shadowlands of our own national security obsessions, as represented in the vast surveillance octopus of the NSA. As described in an excellent Wired report, Stellar Wind is the catchy code name for the world’s largest data mine, now under construction in Bluffdale ,Utah. 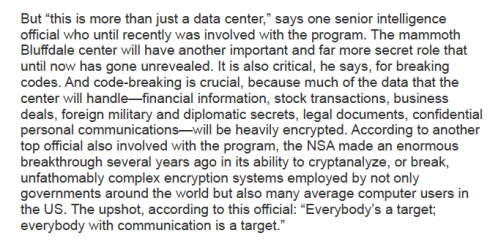 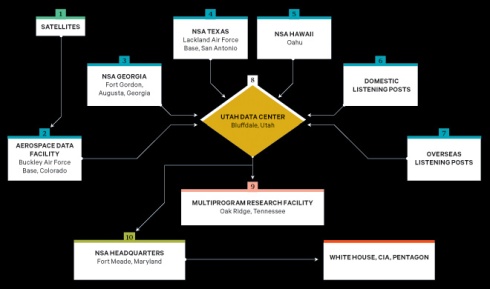 BLOWING IN THE WIND

At the core of the project crunching the yottabytes will be the the world’s fastest supercomputer, generating so much heat that it will require 60,000 tons of cooling equipment, heat released by the creation of the most exhaustive behavioral map of a species ever conceived, a dynamic map that aims to capture every burp and twitch of the Naked Crowd. This lethal funnel of decryption and pattern analysis will eventually deliver an obliteration of individual privacy so thorough as to rip the notion of inalienable human rights from whatever remains of the American narrative, and leave us: where?

With a Stellar Wind blowing hard in our faces, we turn once again to Chapter 44, and to Ishmael’s astute diagnosis: