We take notice of the recent blooming of a corpse flower at the national botanical gardens in Washington DC. A roaming correspondent informs us that the flower’s distinctive stench has already dissipated, having served its function to lure pollinators into the fold like — well, like flies to a corpse.

This particular Amorphophallus titanum last bloomed in 2007; rumor has it that Donald Rumsfeld visited the garden and classified the blooming corpse as an unknown known. 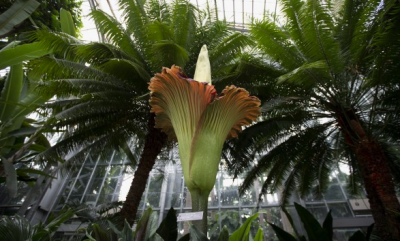 One might imagine the garden visitor experiencing difficulty in picking out the fetid reek of Titan Arum from the capital’s broadly endemic stink; that foul and all-encompassing smog released by immeasurable heaps of rotting and rotten language, left from every level of its use.

Of course, corrupt language serves a very useful function for those exercising power. As expressed by W.H. Auden during his 1972 interview with Michael Newman of The Paris Review:

In principle, it may be the poet’s role to protect and sustain the sacredness of language, yet Auden also well perceived how few poets were willing to accept the role, when other choices promised a more fragrant future. 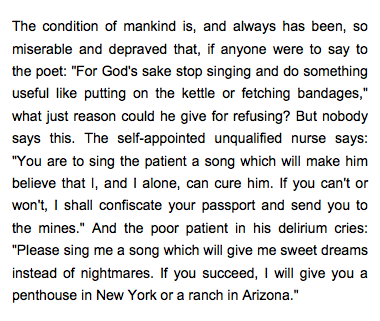 Here at DP, the graveolent condition of language has become too persistent and widespread to terrify us anymore. No, what terrifies us is that nobody gives a mucid fig about it, least of all those for whom language is supposed to be “sacred”.

Elsewhere in The Paris Review interview, Auden mentions another useful (and long-discarded) role for poets and artists: to discern the truth, whether about flowers or corpses. 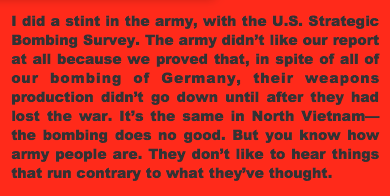 This entry was posted on Tuesday, July 23rd, 2013 at 11:27 and tagged with auden role of poet, corpse flower, corruption of language and posted in bearings, buoys, DP. You can follow any responses to this entry through the RSS 2.0 feed.
« Harlequin Heads
Love, Death and Flies »