MOMENTS BEFORE A RAID OF THE UNSPEAKABLE

A DP correspondent has reminded us of the fearless researches and reflections of Jim Douglass, above all his meticulous review of evidence regarding the Kennedy assassination, JFK and the Unspeakable: Why He Died and Why It Matters, in which he identifies the deep (unspeakably deep) national security reasons why Kennedy had to be eliminated, thereby making way for the more pliable and bellicose Johnson.

Opening a lengthy presentation given at a conference in Dallas, Douglass referred to his work as a hopeful experiment in truth, performed in the service of nonviolent transformation. 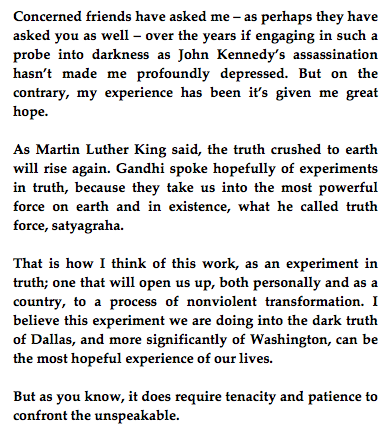 Here is Gandhi’s own description of his use of the tern “satyagraha”:

Jim Douglass identifies Thomas Merton’s Raids of the Unspeakable as the major inspiration for his own experiments in truth : 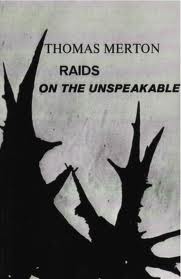 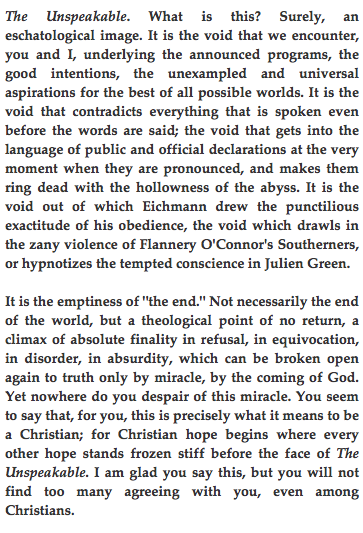 THE WHOLE WORLD IS SECRETLY ON FIRE

This entry was posted on Saturday, August 31st, 2013 at 10:50 and tagged with forceful truth, jim douglass jfk and the unspeakable, military industrial murder, rhomas merton raids of the unspeakable, satyagraha gandhi and posted in bearings, buoys, DP. You can follow any responses to this entry through the RSS 2.0 feed.
« Late in the Evening
Poetics of the Pyre »