One of our core theses here at DP proposes that civic engagement in what used to be called “the public sphere” increases when power is most dispersed. Though we are aware that small groups often behave in ways that are equally as dysfunctional as large aggregations; and that small is not always beautiful; and that human politics will never be far removed from the sausage factory; nonetheless, we strongly endorse all campaigns for local, regional autonomy and political independence.

Among the more astute commentaries firing up the web regarding today’s referendum on the future of Scotland, we find Adam Ramsay in the Guardian:

Let us hope that Mr. Ramsay does indeed have his hand on the pulse of Scottish youth. Cat Boyd of Radical Yes suggests that he is on to something: 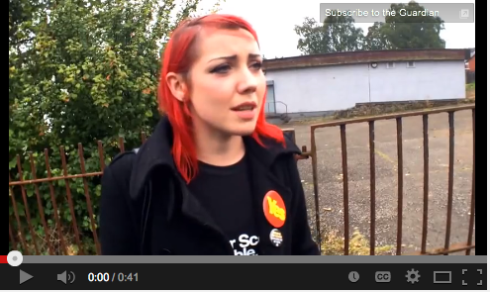 And here is an excerpt from a stirring open letter to the future children of Scotland from Claire MacGillivray in Bella Caledonia:

The results will soon be in.

UPDATE SEPTEMBER 19: The “no” voters prevailed, with 55% of the total. Given the powerful corporate, media and ruling “elites” arrayed against independence, the result is hardly surprising. Yet the desire for autonomy has expressed itself in myriad ways, and we suspect that the experience of the past several months will shape Scottish culture and politics for many years to come. As Ms. Boyd says in the video above: “It can’t be put back in the bottle.”

This entry was posted on Thursday, September 18th, 2014 at 10:36 and tagged with local autonomy, power dispersed, scotland referendum and posted in bearings, buoys, DP. You can follow any responses to this entry through the RSS 2.0 feed.
« Flowering Light
The Paradox of Wonder »