Today we pay homage to the extraordinary life and art of Eduardo Galeano, that peerless poet of recollection and retrieval; that lover of life in all its forms; that midnight footballer; that philosopher of Time in all her joys and agonies; that meticulous chronicler of resistance and defiance; that champion of diversity and polyphony; that peaceful revolutionary; that beautifully unrepentant Utopian; that gracious, wry and generous gentleman.

In his masterful final book, Children of the Days, we find the following entry for April 14: 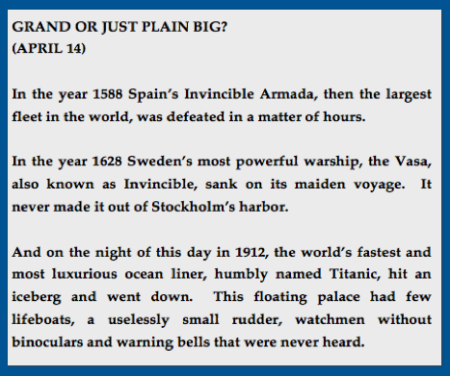 Without waste of a single word, Galeano brings the past vividly into the present, since every day contains within it the mnemonic ripples of every past day. Constantly resisting the allures of an intoxicating amnesia, Galeano always sought to measure our brutal actions against the noble aspirations that give them cover. In a passage from Mirrors: Stories of Almost Everyone, he follows our “peaceful” footsteps up to the surface of the moon: 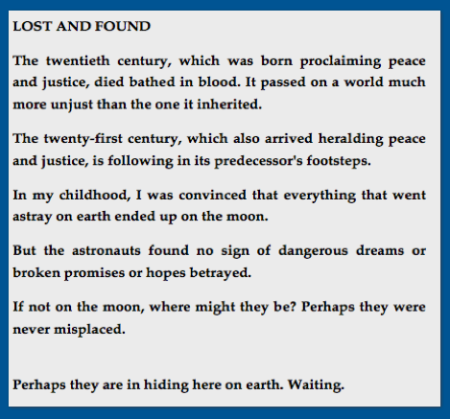 Throughout his writing, Galeano reminds us that for every act of atrocity and oppression, there are those who resist and reject, often emerging from the ranks of the most exploited. Returning to Children of the Days:

In story after story, Galeano inspires his readers to imagine a different future from the one projected by the past. An unabashed dreamer of alternative futures, he invites us to fly into another away of being, with joy and desire. In a widely-circulated ode for a new millennium, he stubbornly imagines a world……

Though born with a poet’s ears, Galeano also pursued training in journalism, and cultivated a masterful talent for capturing the telling detail at the edges of a larger story, such as a forlorn shoe left by the side of a Berlin canal following the murder of Rosa Luxembourg:

This entry was posted on Tuesday, April 14th, 2015 at 12:48 and tagged with eduardo galeano death, eduardo galeano homage and posted in bearings, DP. You can follow any responses to this entry through the RSS 2.0 feed.
« Island of the Monomanes
An Order So Unwieldy »