An Order So Unwieldy

A shared interest in the narrative buoyancy of Queequeg’s coffin alerted us to the remarkable work of the poet, painter and boat designer Antonio Dias.

We shall be delving more thoroughly into Mr. Dias’ work in future DP explorations; for now, we excerpt from an essay (slightly edited by DP) written to commemorate the 100th year since the sinking of the Titanic. On this, the 103th anniversary (by this time of morning, she was at the bottom of the North Atlantic), every one of his insights still applies. The images are two paintings, also from the hand of Mr. Dias: 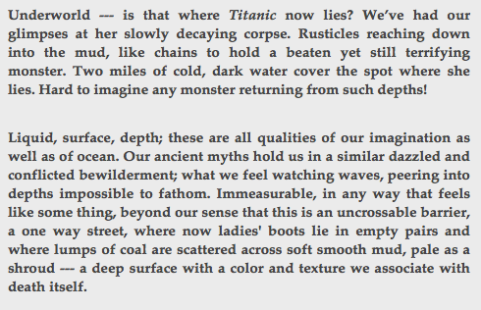 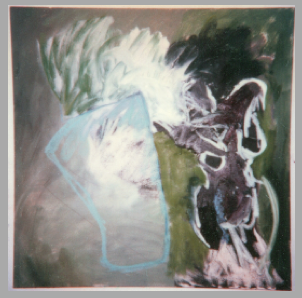 The buoyancy of spirit and intellect that enlivens the varied creations emerging from the studio of Mr. Dias persuades us that even though we have already struck the iceberg, all shall not be lost when the waves wash over the bridge.

Meanwhile, on our own voyage of oblivion, several First Class passengers collect ice cubes for their drinks. In the bar, the well-heeled huddle together, fervently discussing bright prospects for their pending immortality. No matter what happens to the ship, surely they are invincible, unsinkable. It says so on their passports.

Perhaps later in the winter, they say, let us all travel en masse to that new eco-island, you know the one. Yet plans for such reunions are made in vain; in a few hours — measured in deep time — their epoch of luxe flotation will come to an end.

The band plays on. Somewhere, beneath the sound of engines dying out, the careful listener might discern the cadenced rhythms of a chaplain, praying. Soon enough, he will bob about like a cork for a few moments on the surface of the sea, and then be gone.

MORE THAN ENOUGH TIME FOR ANOTHER COCKTAIL

This entry was posted on Wednesday, April 15th, 2015 at 07:37 and tagged with Antonio Dias, Queequeg, Titanic and posted in bearings, buoys, DP. You can follow any responses to this entry through the RSS 2.0 feed.
« Invitations To Flight
Frequent Wind »