We are indebted to Amy Goodman for alerting us to a number of recent suicides among professional taxi and livery drivers in New York City, under tremendous stress as a result of the so-called gig economy, as expressed in app-based “disruptive” enterprises such as Uber and Lyft. According to the co-founder of the New York Taxi Workers Alliance, Bhairavi Desai, speaking on Democracy Now:

It’s a race to the bottom. Every day, people are going deeper and deeper into poverty. And this is the reality of the so-called gig economy. It’s about destroying what has been a full-time profession, turning it into part-time, poverty-pay work. Uber and company—Uber and Lyft—and, by the way, they are absolutely the same. It’s all one same business model. They use their political might. In 2016, Uber and Lyft combined spent more on lobbying than Amazon and Walmart combined, and Microsoft, as well. And so, they use their political might to win deregulation bills.

The destruction of the taxi and livery profession exacts a heavy price; writing in a social media post shortly before killing himself in front of City Hall, driver Doug Schifter delivered a blistering attack on those who enable such a duplicitous transfer of wealth: 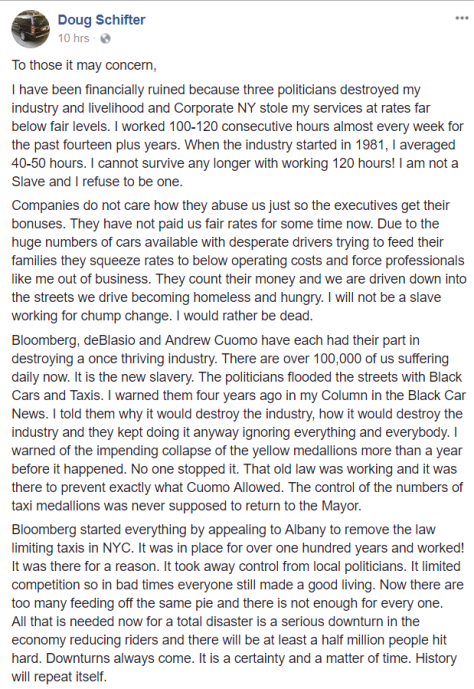 Writing in the Boston Review, Clara Hendrickson names and shames the delusions of the gig economy with specific reference to Airbnb, Uber and Lyft:

The first gig economy delusion we need to clarify is that these platforms offer temporary work to help bridge gaps in employment. In reality, many gig economy platforms tend to encourage full-time work, not the empowering, flexible part time arrangement they so often claim. While sharing economy platforms promise freelancers they can earn income on their own terms, evidence shows that to enjoy this promised economic security, freelancers often have to labor under conditions that mirror those of full-time employment. For instance, an analysis of Uber earnings data suggests that average hourly earnings only become reliable for those who work over thirty hours a week while the earnings are typically erratic for those who drive part time. Not to mention Uber, Lyft, and Postmates incorporate psychological tricks into their apps, like those used by video game designers, to keep their drivers on the road longer.

Freelancing in the gig economy is thus not just a safety net for those in between jobs or those looking to “get back on their feet.” In reality, it is often a full-time job. Yet because these companies assert they’ve created a safety net rather than a labor market, they’ve successfully justified abnegating their responsibility as employers. Given their status as independent contractors, gig economy workers are denied the benefits, such as health care and paid time off, usually enjoyed by workers in traditional arrangements.

The second delusion we must address is that these platforms offer a path forward for a more equitable and inclusive economy. Airbnb calls itself “an economic lifeline” and often boasts about the economic opportunities it has opened up to ethnic minorities. Similarly, Lukas Biewald, the CEO of CrowdFlower, argues that the crowdsourcing industry is “bringing opportunities to people who never would have had them before.” Anyone “who wants to can do microtasks,” Biewald says, “no matter their gender, nationality, or socio-economic status, and can do so in a way that is entirely of their choosing and unique to them.”

Such inspiring and hopeful talk is common among the platforms, but it represents a willful ignorance on the part of their executives who have not only denied their freelance workforce benefits but excluded them from the byproducts of corporate success. As economist Robert Solow notes, the “casualization” of work means that many of today’s worker “have little identification with the firm,” and thus “correspondingly little bargaining power.” As a result, these workers “have little or no effective claim to the rent component of any firm’s value added.” This reality stands in stark contrast to the empowering message of economic inclusion delivered by gig economy platform executives.

Moreover, though they are often advertised as opportunities for economically excluded communities to build wealth, there is emerging evidence that these platforms enable a regressive wealth distribution. Wealthy Airbnb hosts, for example, typically spend extra money on cleaning and booking logistics services that are specifically designed to boost hosts’ ratings and attract more guests. The platform often ends up advantaging hosts who reside in wealthy, urban hubs even while the platform boasts it is building wealth in underserved communities. As New Yorker staff writer Nathan Heller keenly observes, the platform is “helping divert traditional service-worker earnings into more privileged pockets.”

The gig economy embodies a particularly toxic form of neo-liberalism, whereby workers become the agents of their own precarity, experiencing a steadily deepening impoverishment and marginalization. As Douglas Schifter so powerfully expresses, “I will not be a slave working for chump change. I would rather be dead.” Returning to his post: 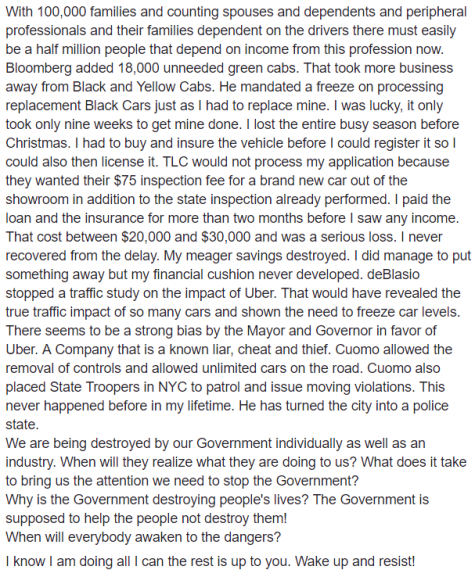 The gig economy is an economic disaster disguised as “game-changing” (gag) innovation, providing a classic example of what Gunther Anders called “inverted utopianism”,   a state of mind where we are no longer able to imagine the social and existential implications of our clever inventions. Let us collectively reject “disruption” that is based in precarity, exploitation, immiseration and death.

This entry was posted on Friday, February 9th, 2018 at 16:09 and tagged with gig economy delusions, inverted utopians and posted in bearings, DP. You can follow any responses to this entry through the RSS 2.0 feed.
« A Place of Harm
Erasure of the Unseen »