We are grateful to our colleagues at Rewilding Earth for publishing an excellent, detailed report on the threat of extensive deep-sea mining, written by Abundant Earth author Eileen Crist. The article includes an extensive bibliography, as well as the outlines of a non-extractive alternative way of connecting with seaborne earthlings and their magnificent habitat.

Brief excerpts below, together with a few images of hungry ghost maw-machines relayed from the website of a “pioneering” sea-mining corporation. They communicate the dark, indiscriminate and savage sort of supremacist violence that has become the signature of an extractive capitalism gone berserk, through an “always encroaching’ (see below) greed for plunder and profit. 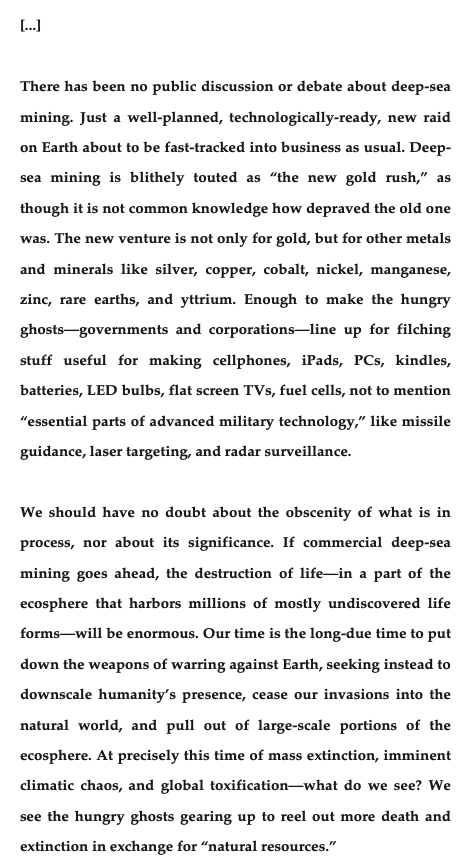 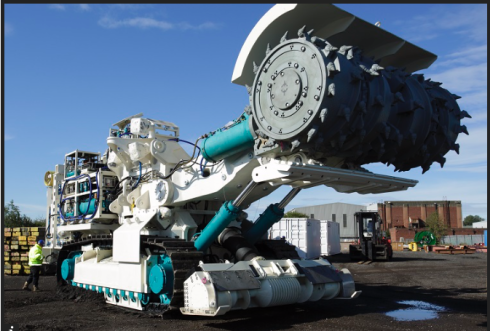 As we have noted previously, surely Jeff Bezos occupies a cosmic category all his own within the Annals of Hubris and Delusion. The below excerpts are from a February 2019 interview; images, from the website for this spectacularly toxic and dystopia vision of the future, with captions added by DP. 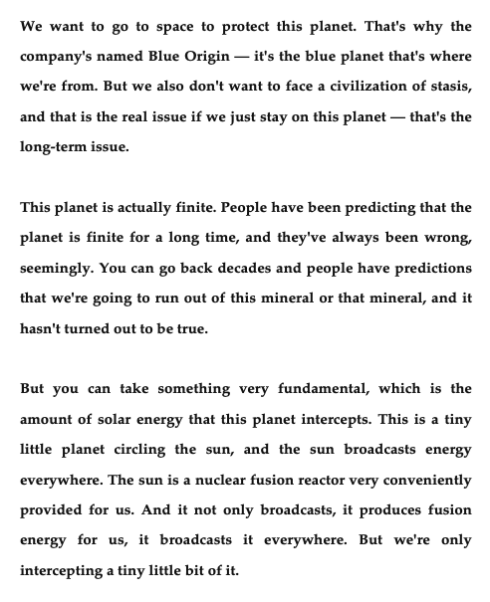 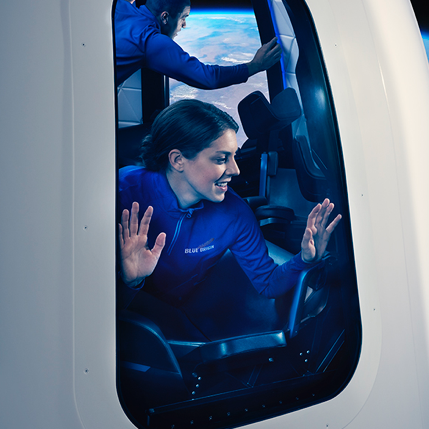 WOW, LOOK AT THAT COOL DESOLATION WE CREATED DOWN THERE!

We do not pretend to know the future here at DP. Yet the above nonsense reminds us of the famous lines from Tacitus in Agricola:  Auferre, trucidare, rapere, falsis nominibus imperium; atque, ubi solitudinem faciunt, pacem appellant.

In the Peterson translation: To plunder, butcher, steal, these things they misname empire: they make a desolation and they call it peace.

And then there is the passage from Gunther Anders to which we return again and again, and that we recommend to Mr. Bezos for his evening meditation as he gazes ad astra: 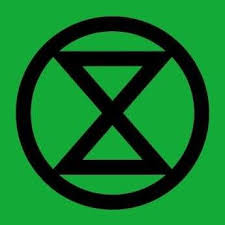 We are indebted to Amy Goodman for alerting us to a number of recent suicides among professional taxi and livery drivers in New York City, under tremendous stress as a result of the so-called gig economy, as expressed in app-based “disruptive” enterprises such as Uber and Lyft. According to the co-founder of the New York Taxi Workers Alliance, Bhairavi Desai, speaking on Democracy Now:

It’s a race to the bottom. Every day, people are going deeper and deeper into poverty. And this is the reality of the so-called gig economy. It’s about destroying what has been a full-time profession, turning it into part-time, poverty-pay work. Uber and company—Uber and Lyft—and, by the way, they are absolutely the same. It’s all one same business model. They use their political might. In 2016, Uber and Lyft combined spent more on lobbying than Amazon and Walmart combined, and Microsoft, as well. And so, they use their political might to win deregulation bills.

The destruction of the taxi and livery profession exacts a heavy price; writing in a social media post shortly before killing himself in front of City Hall, driver Doug Schifter delivered a blistering attack on those who enable such a duplicitous transfer of wealth:

Writing in the Boston Review, Clara Hendrickson names and shames the delusions of the gig economy with specific reference to Airbnb, Uber and Lyft:

The first gig economy delusion we need to clarify is that these platforms offer temporary work to help bridge gaps in employment. In reality, many gig economy platforms tend to encourage full-time work, not the empowering, flexible part time arrangement they so often claim. While sharing economy platforms promise freelancers they can earn income on their own terms, evidence shows that to enjoy this promised economic security, freelancers often have to labor under conditions that mirror those of full-time employment. For instance, an analysis of Uber earnings data suggests that average hourly earnings only become reliable for those who work over thirty hours a week while the earnings are typically erratic for those who drive part time. Not to mention Uber, Lyft, and Postmates incorporate psychological tricks into their apps, like those used by video game designers, to keep their drivers on the road longer.

Freelancing in the gig economy is thus not just a safety net for those in between jobs or those looking to “get back on their feet.” In reality, it is often a full-time job. Yet because these companies assert they’ve created a safety net rather than a labor market, they’ve successfully justified abnegating their responsibility as employers. Given their status as independent contractors, gig economy workers are denied the benefits, such as health care and paid time off, usually enjoyed by workers in traditional arrangements.

The second delusion we must address is that these platforms offer a path forward for a more equitable and inclusive economy. Airbnb calls itself “an economic lifeline” and often boasts about the economic opportunities it has opened up to ethnic minorities. Similarly, Lukas Biewald, the CEO of CrowdFlower, argues that the crowdsourcing industry is “bringing opportunities to people who never would have had them before.” Anyone “who wants to can do microtasks,” Biewald says, “no matter their gender, nationality, or socio-economic status, and can do so in a way that is entirely of their choosing and unique to them.”

Such inspiring and hopeful talk is common among the platforms, but it represents a willful ignorance on the part of their executives who have not only denied their freelance workforce benefits but excluded them from the byproducts of corporate success. As economist Robert Solow notes, the “casualization” of work means that many of today’s worker “have little identification with the firm,” and thus “correspondingly little bargaining power.” As a result, these workers “have little or no effective claim to the rent component of any firm’s value added.” This reality stands in stark contrast to the empowering message of economic inclusion delivered by gig economy platform executives.

Moreover, though they are often advertised as opportunities for economically excluded communities to build wealth, there is emerging evidence that these platforms enable a regressive wealth distribution. Wealthy Airbnb hosts, for example, typically spend extra money on cleaning and booking logistics services that are specifically designed to boost hosts’ ratings and attract more guests. The platform often ends up advantaging hosts who reside in wealthy, urban hubs even while the platform boasts it is building wealth in underserved communities. As New Yorker staff writer Nathan Heller keenly observes, the platform is “helping divert traditional service-worker earnings into more privileged pockets.”

The gig economy embodies a particularly toxic form of neo-liberalism, whereby workers become the agents of their own precarity, experiencing a steadily deepening impoverishment and marginalization. As Douglas Schifter so powerfully expresses, “I will not be a slave working for chump change. I would rather be dead.” Returning to his post:

The gig economy is an economic disaster disguised as “game-changing” (gag) innovation, providing a classic example of what Gunther Anders called “inverted utopianism”,   a state of mind where we are no longer able to imagine the social and existential implications of our clever inventions. Let us collectively reject “disruption” that is based in precarity, exploitation, immiseration and death.

Desert of the Vanities

We take note of a recent festival held on the Moapa River reservation, an event that bills itself as “Burning Man for the 1%”, or Further Future.

Google CEO Eric Schmidt offers the following assessment: “This is a high percentage of San Francisco entrepreneurs, and they tend to be winners. It’s a curated, self-selected group of adults who have jobs. You can tell by the percentage of trailers.”

In prose demonstrating that the grotesque delusions adrift within contemporary reality will always defeat any attempt at satire, here are a few selections from the website self-description, intercut with images taken from this – ahem – curated assembly of self-selected winners. Captions added by DP: 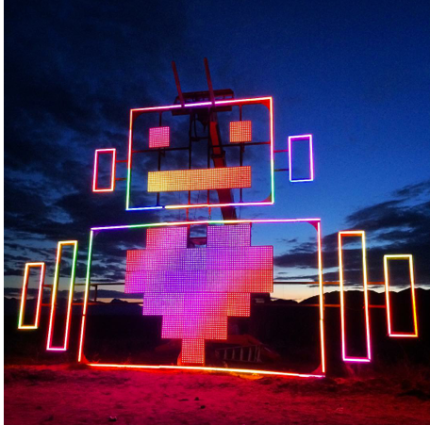 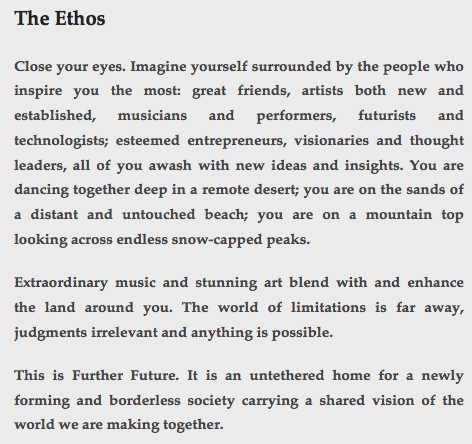 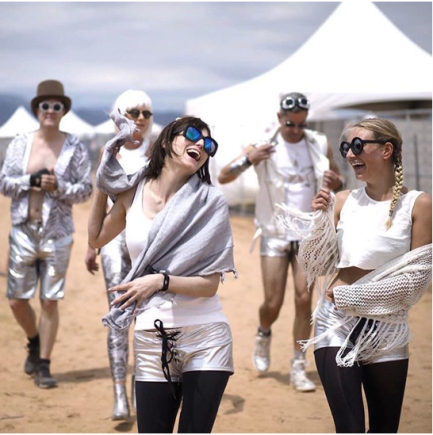 UNTETHERED, BORDERLESS AND WITHOUT A SINGLE CLUE 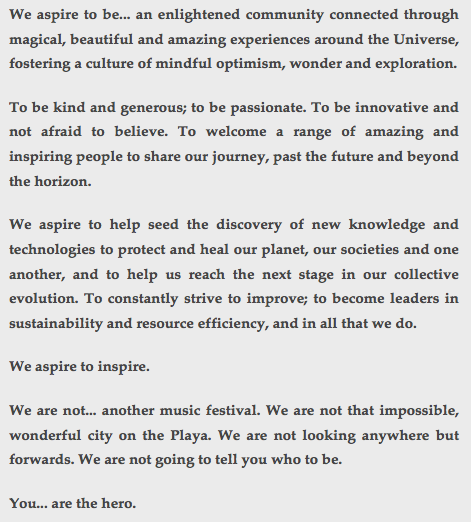 TWO HEROS; ONE WITH HORNS

A report in the Guardian describes the following scene, as gag-worthy as fatty foie gras:

Of Spotigy and Buri

In the wake of our brief excursion into the slaughterhouse sensorium, we received correspondence steering us to a December report in the Sacramento Bee, uncritically lauding the advent of a brave new chapter in the dark annals of livestock management and the eventual transformation of cattle into beef.

The untitled images of well-horned creatures were bred from the imagination of Michel Nedjar. 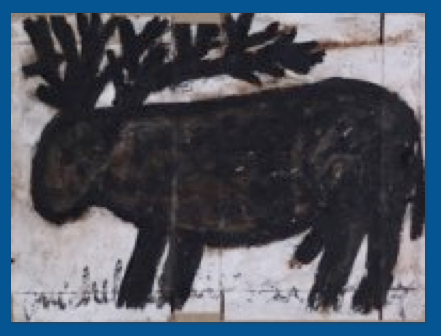 Here is an explanation of gene editing from the horse’s mouth, that is, the researcher referenced in the article: Alison Van Eenennaam. 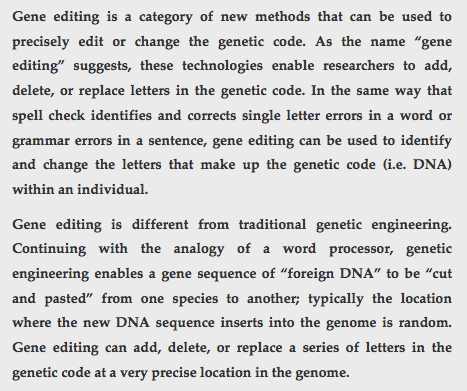 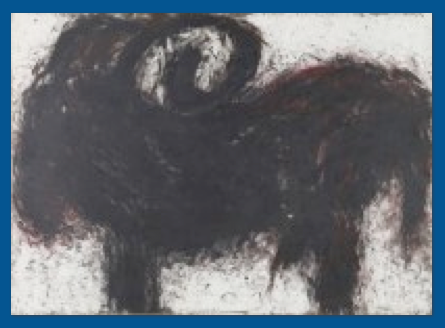 When scientists begin to talk about intervening in millions of years of evolutionary biology as comparable to word processing, as we cut and paste out way into eternity, DP begins to think humans have descended so far into the chasm between techne and ethos that there is surely no way out.

How soon before the word processor is applied to ourselves, in pursuit of obedience, efficiency and order, achieving safety for the masters of the universe, such that they will not be gored by an unruly stampede?

In the comments to the newspaper report, we were relieved to find the below sting from a Wooly Bee:

Repulsive and reprehensible indeed; no, this will not end well.

During these dog days of August, we take note that both NASA and the Japan Meteorological Society have confirmed what many enduring the Middle Eastern “heat dome” may have long suspected: July, 2015 was the hottest on record.

Here is an eye-in-the-sky representation of what this looked like in the vicinity of the Tigris and Euphrates: 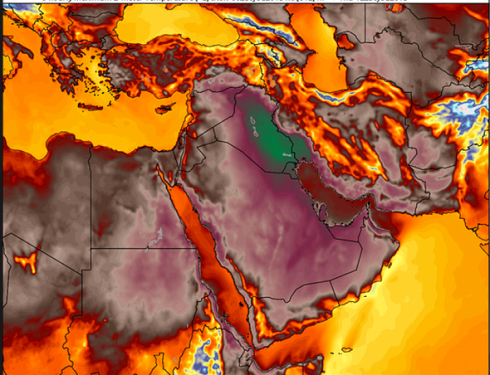 The month’s heat fired up the imagination of one Sean Mulryan of the Ballymore Group, in concocting a new development named Embassy Gardens, with its two towers linked by a “sky-pool swim-bridge”, or some such luxe-marketing blubber.

DO YOUR LAPS IN THE LAP OF POWER

Conveniently located next to the American Embassy in London, the acrylic water tube will pose a variety of technical challenges. Not to worry – engineer Brian Eckersley is all over it, like melted plastic. As he recently oozed to the BBC:

Alas, the distortion of the interface ought be the least of Mr. Eckersley’s worries; if he wishes to focus his considerable intelligence on a subject worthy of his anxiety, he might consider the fate of Gunther Anders’ inverted utopians, for whom he is such an eloquent if unwitting mouthpiece.

LIQUIDATION OF THE SELF

Meanwhile, in an abandoned swimming pool from another era, a different sort of engineer proposes an alternative diversion for our boiling Anthropocene: 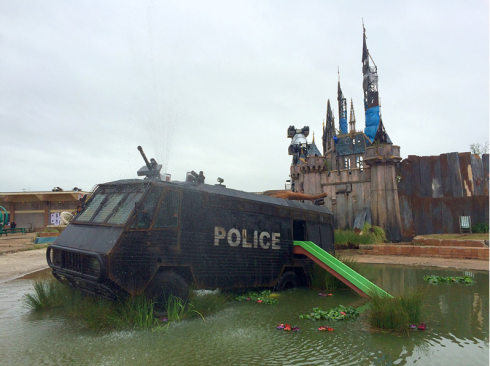 UNABLE TO IMAGINE THE THINGS WE MAKE?

JUST LIKE THIS, BANKSY NAILS OUR SPIRIT TO THE TIMES