Our House Is On Fire

As fires continue to devastate the Amazon, another conflagration rages out of control in nearby Bolivia. This week, we relay an outstanding alarm bell essay by a former Bolivian ambassador to the UN named Pablo Solon, translated and published on the website of Ecologist: The Journal for the Post-Industrial Age.

As Solon points out, the Bolivian government appears to think that deforestation is ok if the resulting land is used for the production of “sustainable” biofuels. Such thinking will eventually have unthinkable consequences.

Meanwhile, a fire extinguishing boat has recently arrived on the shores of Turtle Island: 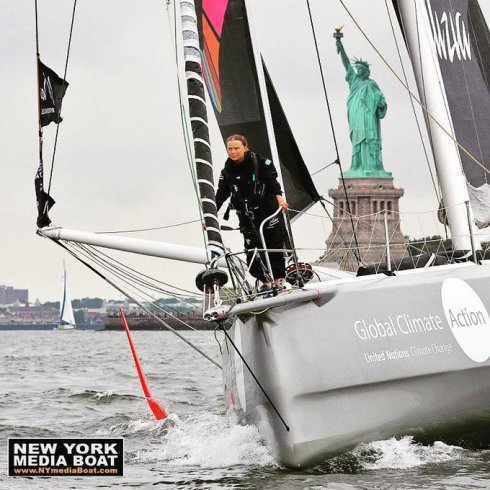 On arrival, the distinguished passenger shown above stated:

Even on a sailboat in the middle of the Atlantic Ocean, I heard about the forests in the Amazon rainforest — the fires in the Amazon rainforest, yeah. And it is, of course, devastating, and it’s so horrible. It’s hard to imagine. So, I mean, we need to — I mean, this is a clear sign that we need to stop destroying nature, and we need — and our war against nature must end.

This entry was posted on Friday, August 30th, 2019 at 13:48 and tagged with deforestation, great Thunberg, Pablo Solon, wildfires and posted in bearings, buoys, DP. You can follow any responses to this entry through the RSS 2.0 feed.
« Where Dreams Die
Memories of Evil »