WE NEED TO SCALE UP

Undeterred by the refusal of a handful of stubborn Scots to become part of his golf fantasyland at Menie in Aberdeenshire, nor by the prospect of a large wind farm that would interfere with the view while on the back nine, Donald Trump recently announced plans to expand his Celtic development plans to the west coast of Ireland — and beyond. With nothing better to do shortly past midnight, we decided to take a flier and send an email query to The Donald’s private account, which we received from his good pal Michael Forbes. We appear to have caught him in a talkative mood in the early hours of April Fool’s day, and a reply swiftly followed:

DP     We have followed your project in Scotland with much interest. Now that you have purchased a new property in Ireland, does this mean you may exit from Aberdeenshire? Have you had enough of the hard-headed Scots?

DT     I don’t care how hard their heads are. The problem is, crack them open, and they’re full of fresh cow pies. Wind power is yesterday’s news if you want to make real money. The only wind that interests me blows from a thousand backswings. That kind of wind, you can take to the bank.

DP     Do you think the Irish will be more receptive to your vision?

DT     Their economy right now is deep in the crapper. If they don’t come to grips with my line of titanium clubs, they’ll be eating potato soup for the next three generations. 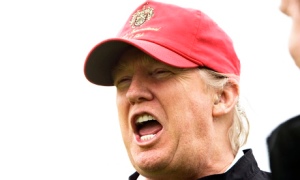 DP     But much recent research indicates that the economics of golf are deteriorating, and that demographic trends will not make the situation any better.

DT     The problem is one of scale. Eighteen or thirty six holes are not enough anymore. The market demands a longer journey. My vision for Ireland will do that. Over the next decade or so, we intend to give Ireland the first countrywide golf course in the world.

DT     Eighteen thousand holes, should take an average person three years to play. Like I say, a serious journey, for the serious golfer. Sort of a modern day pilgrimage.

DP     So what, you intend to buy a thousand golf courses, and then link them up somehow?

DT     Not just golf courses. We’ll buy any little plot of green on the map. This course needs to be disruptive. Holes could be anywhere – village greens, cemeteries, parks. The golf course we bought is just a home base. The golf course of the future will be everywhere. That kind of excitement will give golfers their mojo back. Getting back to the roots.

DT     In the olden days, shepherds would whack skulls around all over those damn islands. That’s the origin of golf. No fixed course, just strong men with sturdy sticks, knocking heads. That’s what I want to do. Restore that sense of freedom, no boundaries, no restrictions.

DP     So what will it cost, to travel this free-swinging pilgrimage route?

DT     There’s the beauty of the thing. Players will pay a one time fee, we’re thinking 10,000 Euros, and then that gives them an official passport to play the whole course. Travel all around the country, buying meat pies and woolie sweaters and pints of beer and plastic leprechauns, all along the way, not just at country clubs but in every backwards village. We get paid up front and the pilgrims can take as long as they want. The longer they take, the more moolah they spend along the way, bringing joy wherever they putt.

DP     Will there be some sort of prize, when players finish?

DT     Oh yes. Once they’re done, they send in their passport with stamps and documentation, and we send out one of my signature red golfing caps, and a locket of my very own hair, something to pass down to the grandchildren, a true heirloom.

DP     Given what happened in Scotland, are you sure you have popular support for this vision?

DT     What choice do the Irish have? They’ve been royally fleeced by the EU, and left shivering butt naked in the damp night. I’m offering a bright ray of sunshine. I don’t see any losers in the picture, nothing but winners, beginning with me and ending way down the food chain.

DT     It could have been Scotland. But they blew it with all that wind power garbage. Plus they’re a bunch of knuckleheads even as water boys for the English – can you imagine how impossible they’ll be, out in the world on their own? Time to cut my losses, and move on to the Emerald Isle, where the little people still know how to roll over and take one for the team.