With political violence, and threats of political violence, vividly present all over the map, we have been revisiting the magnificent work of Doris Salcedo, facilitated by the Salcedo “mini-site” at the Chicago Museum of Contemporary Art, from which we relay the below excerpted text and images: 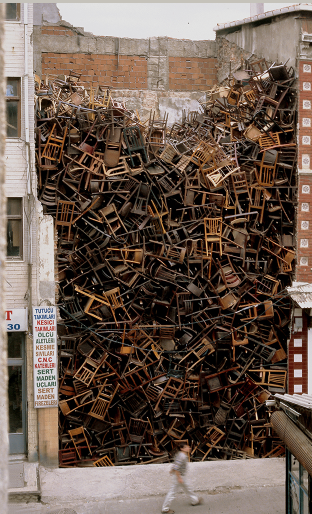 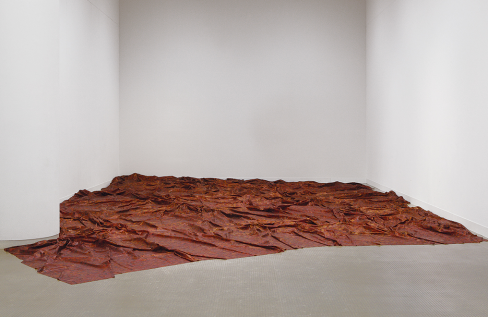 I devoted myself to making art out of political violence, knowing that it is impossible. I think violent death is obscene, so it is outside representation; it escapes symbolisation altogether. I know what I do is in vain.

Yet in facing the impossible, and by bringing the spirits of the unmourned dead into the very heart of her work, Salcedo invites us to consider the abject futility of the ever-expanding woundscape of political violence, as the empty chairs pile up into the heavens.

Now comes a brief dialogue with distinguished artist and DP friend Morgan Bulkeley, regarding an extraordinary series of carved and painted reliefs completed during the Covidzeit, with an Autumn 2021 show at the Yezerski Gallery in Boston. 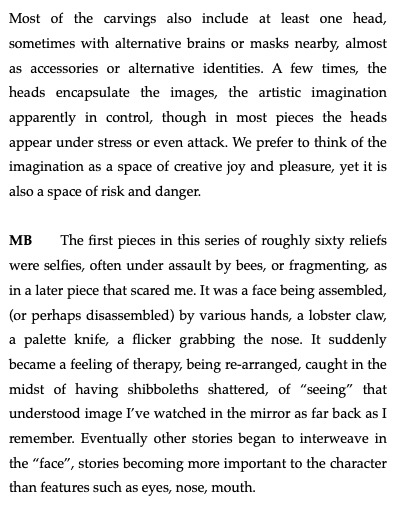 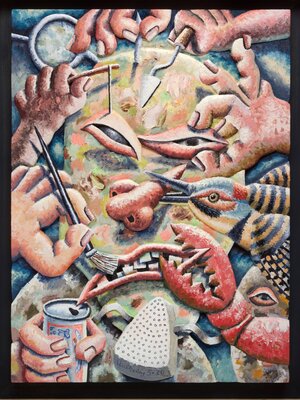 FRITTERING WITH MY FACE 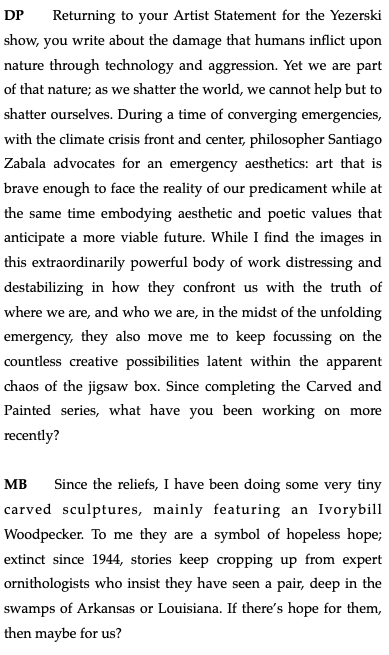 This week, we simply relay the following deep message from adrienne maree brown: poet, writer, pleasure activist, doula, wedding singer (!) and, to our ears, an essential and transformative voice beckoning us towards a viable future, if we are brave enough to live beyond the wounds and wounding: “the healing path is humility, laughter, truth, awareness and choice.”

And a few lines later: “we are our only possible medicine.” Best read out loud, and then read out loud again!

what is unveiled? the founding wound. 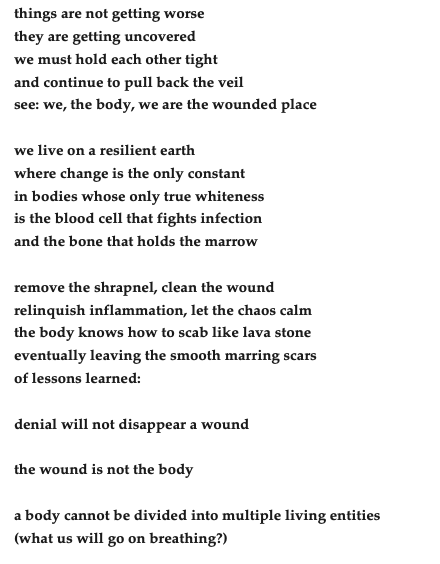 Today, a man named Brandon Bernard was executed for a a crime committed when he was eighteen, in circumstances clouded by numerous unanswered questions. Appeals for clemency fell on deaf ears.

Now comes the honorable Bryan Stevenson, a winner of this year’s “Right Livelihood” award, for his tireless work exposing, documenting and fighting against the injustices of the Carceral State. Below, his acceptance speech for the award.

Images are from the most powerful work of public art in North America: the museum and memorial created by Stevenson’s Equal Justice Initiative in Montgomery, Alabama. 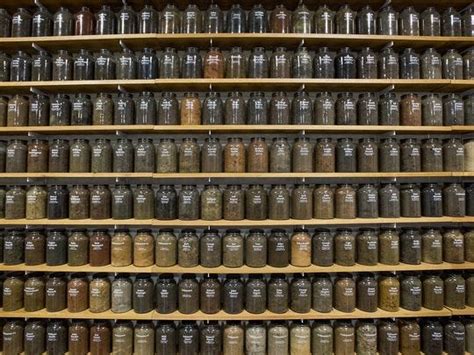 Evidence From a Regime of Racial Terror 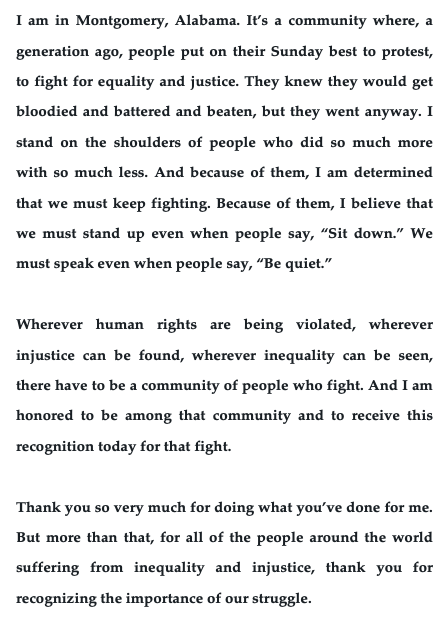 Below, a link to the video of the above speech:

During a time of year when we are moved to reflect upon themes of rebirth, redemption, sacrifice and regeneration, we turn to the perennial wisdom of Thomas Berry, in a passage from a 1996 lecture at Harvard on Ethics and Ecology. Images are from the stunning growing grass sculptures of Mathilde Roussel-Giraudy. 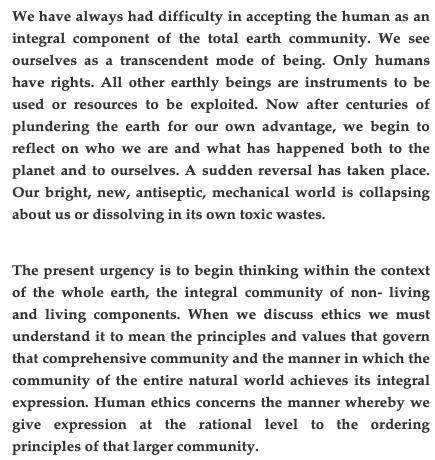 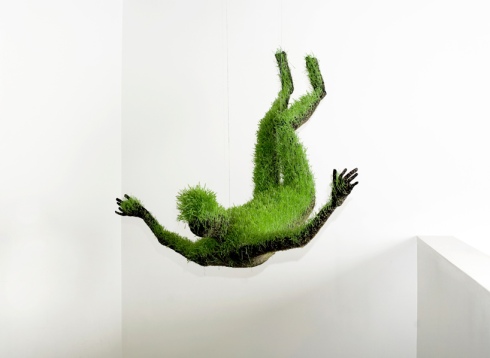 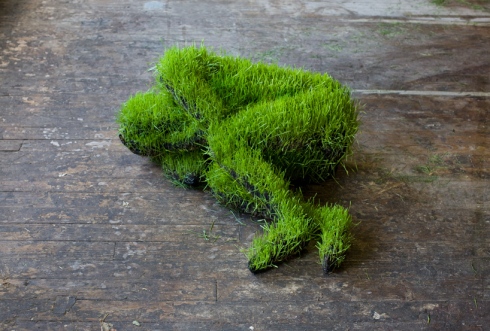 In closing, we offer a poem by Mary Rose O’Reilly in anticipation of new life that shall emerge, in time, from the vessel’s wreck:

During this time of year, we reflect on the mirabile mysterium, the word made flesh; that explosive presence of the divine as expressed through the birth of Jesus.

In the story of Mary, we are also reminded of the sacred nature of words; that the power of speech itself might well be considered as a sacred offering. It would then follow that when we abuse said power to deceive, manipulate or incite violence against each other or against other sentient beings, we are performing acts of profound desecration.

In the spirit of such reflections, a recent interview caught our ear, with Karen Armstrong discussing key themes explored in her magnificent and essential book, The Lost Art of Scripture. Excerpts below, followed by a link to a spirited performance of the Jacobus Gallus setting for Mirabile Mysterium, as performed by La Main Harmonique. 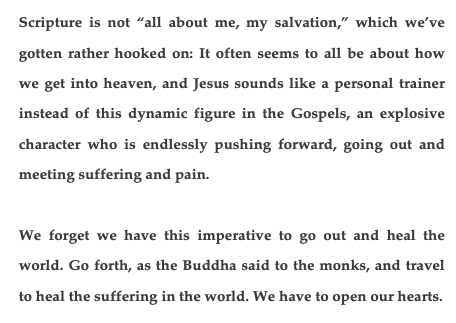 Messengers of the Rope

Now come a few brief passages from a lucid December 2016 conversation with philosopher Peter Sloterdijk, as transcribed from a radio program affiliated with the Los Angeles Review of Books, Entitled Opinions.

The mission of such conversations, as described by host Robert Pogue Harrison: “To practice the persecuted religion of thinking; to think in the midst of the wasteland; to make sure the wasteland does not grow within.” Such is also the mission of DP; onwards to the Zarathustrian rope-walkers. 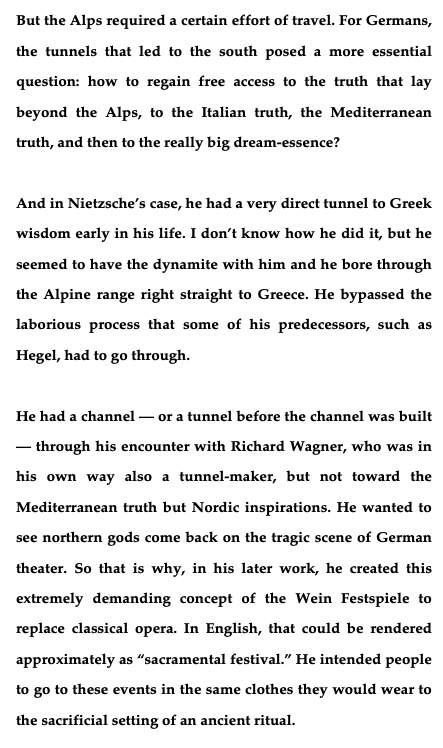 The above three images are from the studio of Heather Pickwell. She writes:

My subject is growth, the imperceptible growth of cells, of plants; the incremental growth observed in shells and coral and the explosive growth of mutating organisms. I take my inspiration from close observation of the woods, fields and coastline of Lincolnshire. I work with natural materials – rope, wool and charcoal – these materials best reflect the physical world for me as I strive to suggest natural forms without reproducing their likeness.

We are grateful to a distant DP reader for steering us to the illuminating, amplifying and enlivening work of artist Lena Herzog, above all the body of writings and audio-visual media related to her project Last Whispers. Below, the opening paragraphs from a talk given at MOMA, linked via the first image.

Clicking on the second image will bring you into the world of the silenced, a world where everything that was once possible to think within a specific language has been irretrievably obliterated; yet another dimension to the mass extinction event that will, in time, deal with our lethal, murderous arrogance. 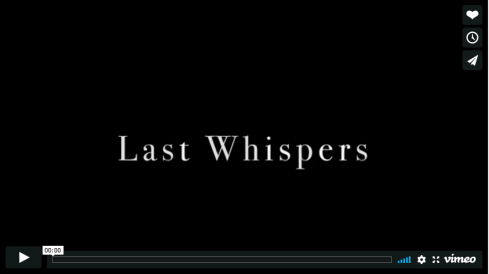 We close with her final paragraph from the same talk, something to think about during this holiday weekend:

Written in the Night

Now comes the gentle yet fierce voice of John Berger, who died this past Monday, in excerpts from a 2003 essay written for Le Monde Diplomatique. The image is from the Rothko Chapel. 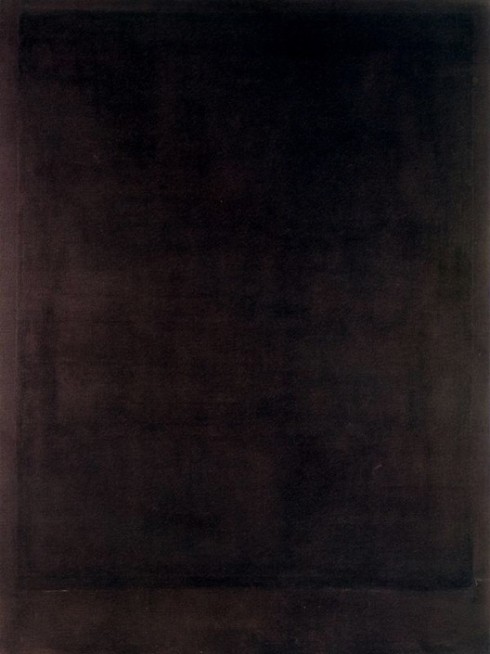 For all his literary gifts, Berger was most at home in conversation, his thoughts closely tied to his limitless capacity for dialogue, and to his vigilant ears. The below conversation with Susan Sontag highly recommended. 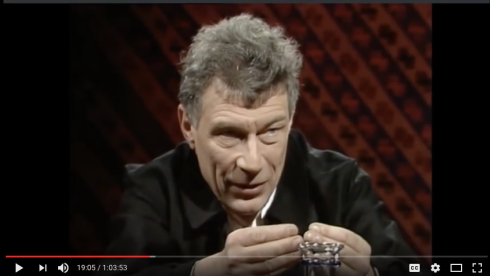 Now comes the honorable Stringfellow Barr, a passionate advocate for the liberal arts as embodied in the so-called “new program” (conceived in 1937) at St. John’s College. Though dating from 1968, Barr’s Notes on Dialogue remain timely and incisive, though he does not mean to cut nor sever.

We have come to know St. John’s College quite well in recent years; if there is any hope at all for our wounded republic, we will need such places, colleges where members of younger generations learn how to exercise their responsibilities as true citizens; colleges that explore and celebrate the arts of freedom.

In a world of violent screams and shouting matches pretending to be politics, we will need to resurrect the polis. For that delicate task, we will also need to remember how to listen, how to reflect, and how to serve each other – and labor together – in dialogue. Unrealistic and utopian, you say? Yes, of course; for the road of the “realists” leads ever more deeply into the abyss.

In the interests of fanning embers and generating a few moments of warmth in front of an oncoming blizzard, we publish a few excerpts together with exquisite images from the hand of Jiri Anderle, borrowed from the collection at the Baruch Foundation. 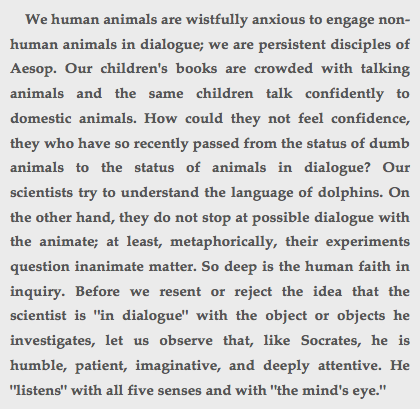 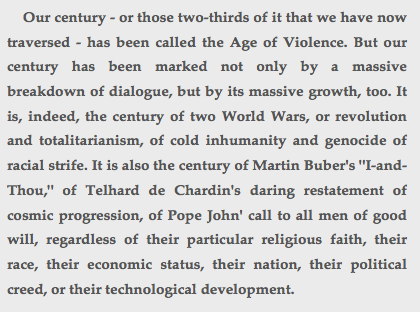 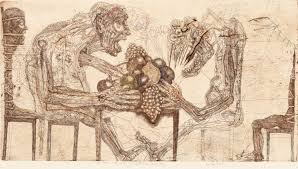 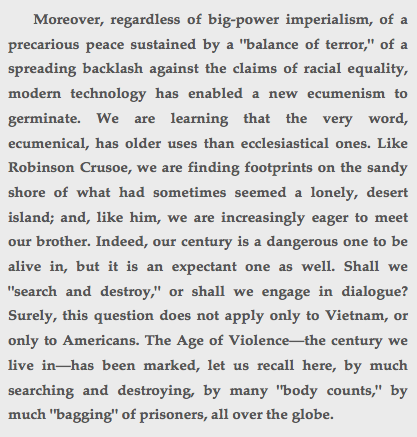 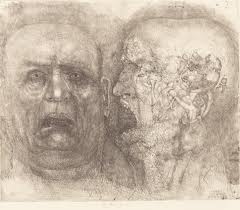