Blood Of This Earth

“This historic ruling takes on even greater importance because it highlights the value of the defence of nature and the rights of indigenous peoples and rural communities. It is a landmark ruling that exposes through the courts the responsibility of companies, not only of their devastating role in the destruction of vital resources, but also in the persecution and elimination of people and organisations that oppose their destructive greed. The ruling highlights the strength of unity and struggle in the demand for truth and justice; a struggle that had as great protagonists the courage and dignity of her family, of COPINH, of all the people who gave themselves to this cause of humanity. I join in the joy that Berta vindicated, the joy of victories. This is a victory with the taste of a feat, because achieving truth and justice in the courts that have historically favoured the crimes of power is a feat. This victory is transcendental, but it does not mean the end of the road in the fight against impunity for the assassination of our comrade Berta“, said Reynaldo Villalba, Vice President of the International Federation for Human Rights.

In memory of Berta’s fearless Lenca spirit, we relay links and writings from an earlier DP:

From her speech in acceptance of the Goldman Prize, the year before she was murdered:

And finally, a video of the entire speech: Berta Cáceres, presente!

Let Us Wake Up

We write today with sadness and outrage at the brutal murder of Honduran indigenous and environmental activist, in her own home.

A leading organizer for indigenous land rights in Honduras, Cáceres co-founded the National Council of Popular and Indigenous Organizations of Honduras, or COPINH. For many years, the group has faced violent reprisals for the brave and unflinching defense of their land and rivers against corporate and governmental incursion and exploitation.

Last year, Cáceres won a Goldman Environmental Prize, the world’s leading environmental award. Below her acceptance speech; in a few carefully chosen and deeply felt words, she articulates the single most urgent issue of our time, and how we must respond. 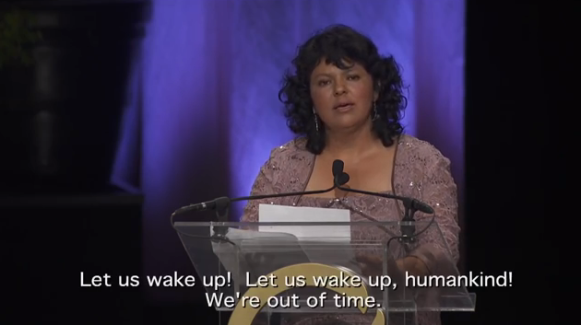