With “Independence Day” upon us, unspooling the usual vaingloriously selective memory pageant, we serve to relay a recent missive from the honorable Janet Alkire, Chairwoman of the Standing Rock Sioux, with a link to a recent video.

If you’ve been following our email updates for the past couple months, I hope you’re getting some valuable new perspectives on the Dakota Access pipeline (DAPL) from our “Dakota Water Wars” series, co-produced by Standing Rock in conjunction with the Oceti Sakowin, the Great Plains Water Alliance, and the Lakota People’s Law Project. Today, I invite you to take in our fifth installment: Ignoring Tribes and Ignoring Laws. 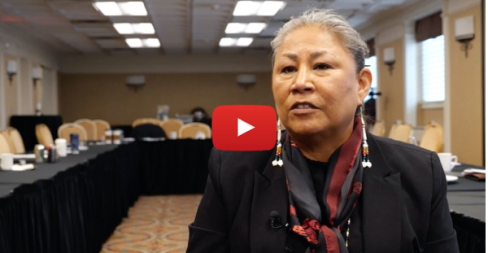 Here’s the bottom line: little has changed since the colonizers arrived on the shores of Turtle Island more than 500 years ago. Our voices are neither heard nor respected, and, whether the issue of the day is resource depletion or extraction, the consequences for our people are never considered important by the U.S. government. But there are always consequences.

We have been removed, relocated, reeducated, and killed. Our rivers have been poisoned, and our animal relatives brought to the edge of extinction and beyond. The same patterns repeat again and again, and still we remain marginalized and muted.

But it’s not only we who are ignored; there are also laws. Good laws that affect our people have, on occasion, been passed, including the Indian Child Welfare Act (which is now under attack at the Supreme Court). But, too often, when an opportunity arises to take our children or extract the next resource, like the toxic Bakken crude oil flowing through DAPL, the colonizer finds ways around his own laws. Or, perhaps, he breaks them knowing he’ll get away with it, especially if the groups most adversely affected are Native.

That’s exactly what happened with DAPL. During our lawsuit to stop the pipeline, the Department of Justice argued that tribal input wasn’t required. The judge disagreed, saying that denying our ability to refute the oil company’s specious claims means DAPL remains “highly controversial under NEPA.” Since the National Environmental Policy Act is there in part to regulate impacts of projects like this one, the oil company is ignoring not just us, but also the law. Sadly, though, there have been no consequences for the oil company, because the U.S. government has abdicated its responsibility to enforce its own laws.

That’s why I continue to make sure you’re aware of what’s happening, and it’s why I’m pressuring federal agencies to hold up their end of the bargain. It’s up to all of us to keep fighting. As our elder, Phyllis Young, says in the video: we must define and instill a new culture of mutual respect, mutual participation, and mutual benefit.

Thank you for watching, reading, and standing with Standing Rock.

This week, we urge careful consideration of timely and essential reporting from The Guardian, detailing a series of fossil fuel “carbon bomb” projects presently underway, or in advanced stages of planning.

These hyper-extractive projects, launched beneath the cover of a looming world war, threaten to push us well past irreversible tipping points, into the terminal stage of global environmental breakdown.

A few graphics relayed below; they speak for themselves. 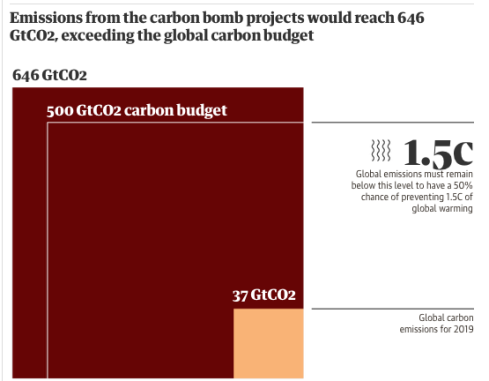 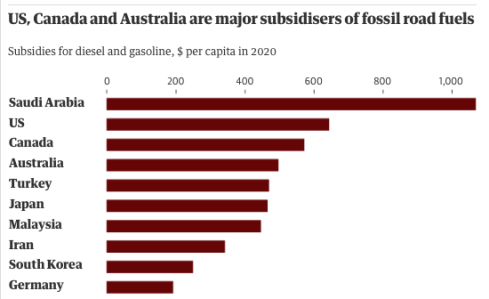 Standing against the impending environmental bombscape, we find brave activists such as the formidable Janet Alkire, Chairwoman of the Standing Rock Sioux Tribe, who sent us the below update earlier today:

Aŋpétu wašté. I bring you an update today about our fight to stop the Dakota Access pipeline (DAPL). As you’ll see in our new video, the Tribes of the Oceti Sakowin are united in this mission, and with organizing help from the Great Plains Tribal Water Alliance, we recently gathered to strategize about the best way to achieve our goal of stopping DAPL before it spills and poisons our water. I also recently met with Assistant Secretary of the Army Michael Connor to discuss the disturbing lack of progress and demand transparency with DAPL’s environmental process.

Watch: leaders from across the Oceti Sakowin came together recently to discuss our #NoDAPL strategy.

So far, none of our concerns are being addressed, and the process is compromised by secrecy. Standing Rock has requested a number of basic documents and plans, such as DAPL’s oil spill response plan for the Missouri River. We have received no information whatsoever, and the failure to cooperate with our Tribe and our emergency managers is unacceptable. DAPL, of course, continues to operate illegally, with no permit for its crossing under Lake Oahe on Standing Rock Nation’s doorstep.

I also called upon the Army to consider the Notice of Violation issued by federal regulators against the pipeline’s parent company, Energy Transfer LP, for its repeated violations of pipeline safety rules with DAPL. The only right course of action is for the Army Corps of Engineers to shut down the pipeline now and properly address these violations in the upcoming Environmental Impact Statement (EIS).

For now, the EIS is mysteriously stalled, even as Energy Transfer and its related companies continue to display a distressing pattern of oil spills and safety violations. Over a recent 8-year period, nine pipelines owned and controlled by these companies experienced nearly 300 spills — including 50 large spills in High Consequence Areas such as Lake Oahe.

You can see why Tribal leaders are unified in our concern about protecting our water and our resolve to do something about it. I ask you, as a friend in this fight, to stay connected with us and ready to take action as soon as the EIS is released. You’ll be hearing more from me soon. By staying strong together, can we still win justice for Standing Rock and all of the Oceti Sakowin. Mni wiconi — water is life.

Wopila tanka — thank you for staying united with us!

Lend Us Your Ear

By DP
This week, we serve as relay for an important update from water protector Janet Alkire, Chairwoman of the Standing Rock Sioux Tribe.

Not Afraid To Look

Now comes activist and historian Nick Estes, citizen of the Lower Brule Sioux Tribe, with excerpts from an interview following the publication of his compelling new book, OUR HISTORY IS THE FUTURE.

Images are from an essay by Charles Rencountre, outlining the genesis of the powerful carved sculpture he and his partner Alicia created for Standing Rock, from which we borrow this week’s title. 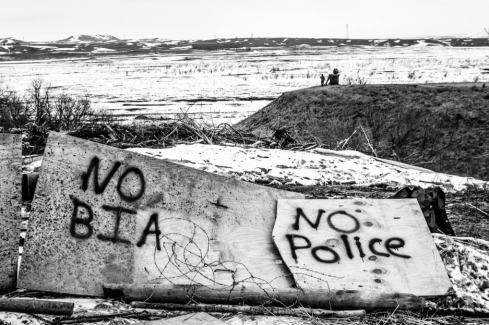 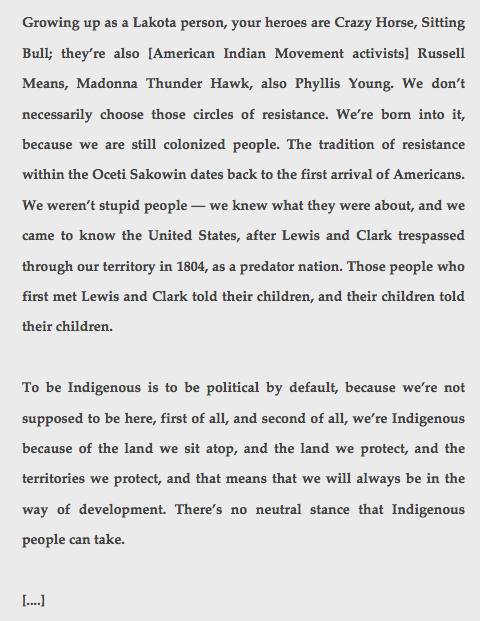 NOT AFRAID TO LOOK FACES THE LAUNCH PAD OF THE DAKOTA ACCESS PIPELINE.

About the sculpture, inspired by a pipe that shows a similar figure on the prow facing the head of a white man that serves as the pipe’s bowl, Rencountre writes:

As for pitting a pipe against the pipeline, he writes:

This Is Your Fight

We are pleased to relay the following press release from the National Lawyers Guild, announcing a criminal complaint against Morton County Sheriff Kyle Kirschmeier and other law enforcement agencies for unjustified and excessive use of force against the peaceful assembly of Water Protectors at Standing Rock. 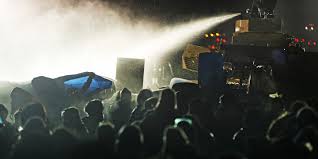 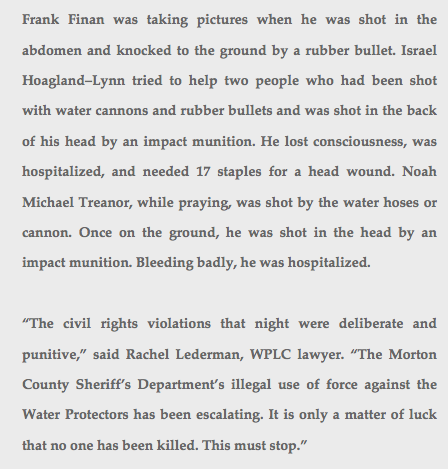 Meanwhile, at least two thousand military veterans have committed to Stand With Standing Rock, and will begin to arrive this weekend. Veteran and former Baltimore police office Michael Wood writes:

We are veterans of the United States Armed Forces, including the U.S. Army, United States Marine Corps, U.S. Navy, U.S. Air Force and U.S. Coast Guard and we are calling for our fellow veterans to assemble as a peaceful, unarmed militia at the Standing Rock Indian Reservation on Dec 4-7 and defend the water protectors from assault and intimidation at the hands of the militarized police force and DAPL security.

We currently have over 2,100 Veterans on the roster. We’ll be standing alongside peaceful water protectors, who’ve endured violent attacks from the private security funded by DAPL and more brutality and arrests at the hands of militarized police and DAPL security. We have full support of the Sioux tribe elders and will be cooperating with them every step of the way.

Violence of the Incompetent

Our title descends from Isaac Asimov, “Violence is the last refuge of the incompetent.” So it goes with the varied forces of “order” deployed at Standing Rock, and their unhinged use of excessive weapons, better suited to the battlefield. Using such weapons against unarmed, peaceful Water Protectors is both cowardly and criminal.

Consider the violence committed against Sophia Wilansky, a recent college graduate who joined the Water Protectors in expression of her own deeply held conviction that the ongoing exploitation of fossil fuels amounts to wanton ecocide. While exercising her constitutional right to assemble and protect the water supply, Ms. Wilansky was viciously attacked by police with rubber bullets and an explosive concussion grenade, severely injuring her arm.

Here is the testimony of volunteer medic Brandi King, who served as an Army medic for eight years, upon witnessing the wounds inflicted upon the young woman: 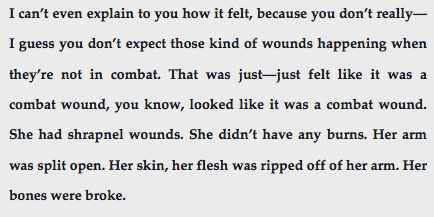 The Morton Sheriff Department, compounding the cowardice of using such a weapon against Ms. Wilansky by fabricating a ludicrous explanation from some delusional alternative univese, released the following statement:

As for the use of water as a weapon deployed in sub-freezing weather conditions, we turn to Angela Bibens, a coordinator with the Water Protector Legal Collective, as quoted in The Los Angeles Times:

Next comes Jesse Lopez, a surgeon and volunteer medic at Standing Rock, as quoted in The Intercept:

Such actions constitute a criminal abuse of power; the perpetrators must be held accountable, and brought to justice. Returning to Mr. Wilansky: 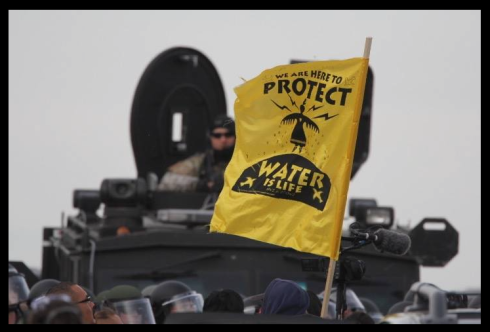